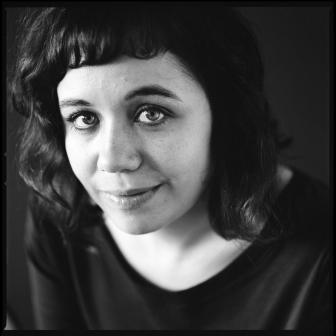 (The Netherlands, 1978)
© Bianca Sistermans
Biography
Kira Wuck (1978) grew up in Amsterdam, the daughter of a Finnish mother and an Indonesian father. She studied at Utrecht Hogeschool (Polytechnic) and did a four-year Creative Writing degree at the Schrijversvakschool. In 2011, she broke through on stage by winning the Dutch Poetry Slam. A year later, her debut collection Finse meisjes [Finnish Girls] was published, which made a deep impression with its cornucopia of original images and surprising observations. Finse meisjes [Finnish Girls] was awarded the Lucy B. & C.W Hoogt prize in 2013, and was nominated for the C. Buddingh’ and the Jo Peters poetry prizes. Her prose debut was published in 2016, a slightly absurdist collection of short stories called Noodlanding [Emergency Landing], which earned her a nomination for the J.M.A. Biesheuvel price. In 2018, her second poetry collection, De zee heeft honger [The Sea is Hungry], was published.
Both Wuck’s poetry and short stories are characterized by the way everyday life and absurdity are interwoven. The characters Wuck introduces to us in her parlando writing style struggle with a fundamental sense of displacement and loneliness that "smells of calf's liver in a baking dish", as she puts it. Although their coping strategies are rarely effective, there is no question of these people giving up or becoming lethargic. Precisely in their resilience, and the sometimes hilarious way in which she presents them, Wuck’s characters are touching.

In the poem ‘This Party’ from Finse meisjes [Finnish Girls], she writes: “This party is so boring Sylvia says / I wish someone would put something in my drink.” It is striking how much these desires are accompanied by a sense of calamity, danger and violence that may or not be subtle. “Sometimes I see the things I want /as a tidal wave that can cover the land/ to get there first I have to drown,” Wuck writes in her poem ‘Hanoi’.

There is craving for an intimacy that is sometimes almost achieved, such as in ‘Eurolines’, in which a curious plan is made to take a bus trip to Auschwitz concentration camp in wintery weather. “You have to have seen it once,” the narrator says drily, a platitude with comic effect. When the bus breaks down, the characters are forced to shelter from the cold in a roadside restaurant:

Within this stanza, Wuck manages to create a poignant balance between intimacy and distance. The above quote also shows Wuck’s great talent for creating contrasts. In a similar way, a group of drunks are shown in the park in ‘Helsinki’, but when the group moves to the station, they “see travellers trying so hard / to be elsewhere / that they cannot possibly exist here.” In the end, it’s not the drunkards who are pitiful, but the travellers in their need to move. This is Wuck to the tee: better to drug yourself in a place where you feel at home than to roam public transport in sobriety.

If uprootedness, loneliness and the desire for contact are today’s condition humaine, then Kira Wuck is one of the Netherlands’ most astute poetic commentators.
© Jan-Willem Anker (Translated by Michele Hutchison)
Bibliography

We Decide to Leave

A dull thud every time it hits the glass

The Sea is Hungry