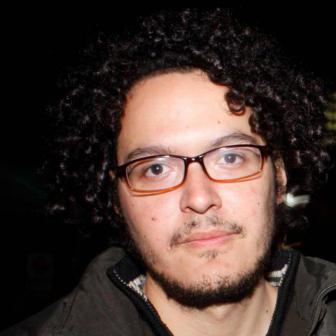 (Peru, 1987)
Biography
When Santiago Vera (Lima, 1987) and his twin brother Rodrigo went off to study philosophy at Lima’s Pontifical Catholic University of Peru, the brothers were both already active in literature in their own ways. Together with a few likeminded people, they founded Ánima Lisa, a collective focused on poetry, poetry and public space, philosophy, art, and communication.
In 2012, Vera published Volúmenes silenciosos (‘Silent Volumes’) and in 2014 Libro de las opiniones (‘Book of Opinions’). In the latter collection, the poet uses a first-person narrator who is constantly questioning himself and the language he uses, attempting to conquer it and get closer to what is essential: "When I say ‘I,’ I’d actually much rather it had been you who said it." From the poem: ‘I have to go out onto the street to know who I’m not.’: '. . . if you asked me what I’m like, I’d say I’m inside, and if you asked inside what, I’d say an outside, and if, pressing me for an answer, you asked me to indicate which outside, I’d turn to the street . . .’

About the poetry of Libro de las opinions, one critic said: ‘I am less interested in what the poet is talking about than I am in how he is creating his language while thinking.’

Vera covers global topics like the Great Pacific Garbage Patch, women’s rights, and other major issues, but also focuses on things closer to home, on sex and procreation, and then his poetry suddenly takes some absurdist turns.

One of the Peruvian authors Vera most admires is Jorge Eduardo Eielson (Lima 1924 – Milan 2006), who also worked as an artist. Vera’s poem ‘Variaciones de un texto para leer, cantar, mirar y contar’ (Variations on a text to read, sing, see, and say) is based on Eielson’s visual work.
Vera now teaches philosophy at his alma mater.

VARIATIONS ON A TEXT TO BE READ, SUNG, WATCHED, AND TOLD SOURCES OF LAW NO VISIONARY EXCEPT I WANT TO FIND A PLACE WHERE I CAN SCREW FOR REAL ALL OF THIS IS REPORTING

Variations on a text to be read, sung, watched and told

All of this is reporting