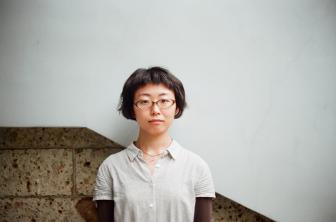 (Japan, 1982)
© Seiko Watanabe
Biography
Sayaka Osaki, one of the rising stars of the Japanese poetry world, calls herself “Noisy Animal”, one “that walks about speaking endlessly”. And yes, many animals appear in her poems: a fox, a squirrel, a brown bear, and an antelope. But there is nothing noisy about her poems. On the contrary, the world of Osaki’s poems is underlaid with silence, an eerie quietness that is at once soothing and disturbing.

Through this silence, we nonetheless hear an echo of the big earthquake and the subsequent tsunami and nuclear disaster which took place in Japan in 2011, when Osaki was making her debut.

In the aftermath of this huge tragedy, the poem Noisy Animal warns people not to believe words; it holds that “Words lie and words tend to dream / Words tend toward cowardice”. In the poet's mind, the natural disaster seems to be associated with the very concept of language.


Language is the first disaster that humanity experiences. Language is the violence that we, as people, continue to experience every day.  We experience this disaster, this violence, and, yet babies still begin to speak, unable to keep quiet.  They repeat somebody else’s words just as they are, reproducing the form of someone else’s experience with disaster.  As a result, I do not know where “this disaster” begins, nor where it ends.  (Author’s note to ‘Noisy Animal’)

The silence in Osaki's poems, however, is also soothing. It reminds us of the deeper silence that existed before this world came into being and that will remain after we are all gone. Through that silence, we hear the sound of:

Sayaka Osaki writes in a simple, everyday language but penetrates the surface of this time and space and reaches the depths of mythology that underlie our ordinary lives. Her poems are personal yet socially relevant at the same time. Among the current generation of young Japanese poets, who tend to be content to remain inside each one's individual micro-cosmos, she is a unique epic poet, speaking of this world, she writes on her web site, with the senses and body of a “noisy animal”.

Her second collection of poetry Pointing Impossible was awarded the 19th Chuya-Nakahara Prize in 2014. In 2016 her first book for children Hey leaf, where is your home? was published. Her most recent book of poetry New Habitat just came out this year, while she continues to produce diverse collaborations with dancers, musicians, contemporary artists, and other poets.

The poet has been invited to international poetry festivals in Lithuania (2015) and Ecuador (2017), and to a young writers meeting during the annual book fair in Cuba (2018). Some of her poems have been translated into English, Spanish and Lithuanian.
© Yasuhiro Yotsumoto
Poetry
地面（The Ground). Tokyo, Anagumasha, 2011
指差すことができない（Pointing Impossible). Tokyo, Seidosha, 2014
新しい住みか（New Habitat). Tokyo, Seidosha、2018

Eternity and a day

A Moment of Silence