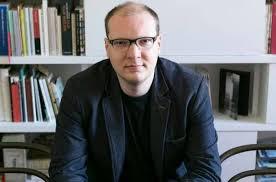 (Belgium, 1979)
Biography
In 2014 Bart Van der Straeten made his poetry debut with the publication of Onbalans (Imbalance) at publishing house Vrijdag. The collection, which was highly praised upon publication, contains poems that try to avert an existential crisis by a very well-built structure. In Onbalans uncertainty is taken for granted. In pure, naked and deep verses, the poet tries to assess the probability of the truth.


Everything in the collection Imbalance oozes sobriety, moderation, rest and equilibrium. In that matter the lay-out of the book is symptomatic: a bright white cover is only disturbed by the black letters of the author’s name, the title and the subtitle and the publisher’s logo, there solely is a bar code on the back cover and two short red diagonal lines that appear to mirror each other and look more menacing than the black that breaks the white. The actual, often numbered, mostly short and clenched poems are organized in series of varying length, but they also mirror each other. The collection opens with the cycle ‘three slopes’ and ends with ‘three wars’, the second and the second last series are entitled ‘four poetics’ and ‘four islands’, the series in the middle of the book are called ‘break and spoke’ (in which also the alternation between the present tense used for the breaking and the past tense used for the speaking is of high importance) and ‘nine infinitives’ (in which also ad infinitum echoes) each consist of nine poems. The reader’s first impression of this collection is one of formal restraint and balance.

The poems report, each in their own way, on an existential crisis of which it remains unclear whether the crisis is conquered in a solution or whether it is turned into the further existence as a condition humaine. The longer poem ‘and the threes’ summarizes everything what is of importance in this collection in a phenomenal way. The paralysis, the desperation, the fear and the despair, the hoping and the (unfruitful) attempt to start anew, the decline and the leaping up, the sense of loss and uselessness, the longing for perfection and the dissatisfaction when it is reached, feelings of power that turn into powerlessness, and words that seem to haunt you and turn against you: all these complex impressions and feelings someone experiences when the bottom, or what he or she believes to be the ground, under his or her life is swept away are summed up in an impressive and sober way.

Although the theme of unbalance is central to the collection, the paradox of Imbalance is that it oozes a very powerful sense of enhancing equilibrium. Bart Van der Straeten shares with the reader a poet’s existential struggle by using a very explorative discourse in which every word has its importance in the verse, the poem, the series and the collection. An irresistible debut.

Bart Van der Straeten studied Dutch Language and Literature at the University of Ghent and is still connected to his alma mater as a lecturer.
© Patrick Peeters
Bibliography