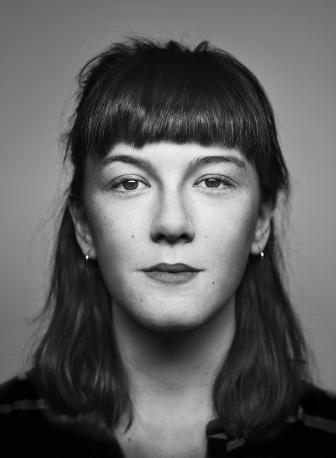 (Belgium, 1991)
© Stephan Vanfleteren for FBM16
Biography
Charlotte Van den Broeck won her poetical spurs in a similar way to Maud Vanhauwaert, namely onstage. The accompanying familiarity of her name provided her debut Chameleon with the necessary impetus. Chameleon would appear to be the perfect title for a debut volume of poetry.
Changeability is the chameleon’s foremost characteristic: the animal adopts various colours depending on its surroundings at any given time.  By giving her first book this title, Charlotte Van den Broeck seems to be aware of the fact that not all the poems are of equal strength, but are still part of her identity. The possible criticism overcome by this attitude distances it from the Schein des Naiven that Friedrich Schiller ascribes to the female gender in the motto prefacing the volume.

At the same time, the chameleon’s changeable and convertible nature is an appropriate image to summarise the search for female identity in this volume. The poems deal with landscapes, the relationship with her grandfather, with a lover and especially with her mother, but the recurring theme is that of an I in search of identity. However, this identity appears as something difficult to attain, because it is inherent in a process of continuous assimilation to others and what is other (‘I am however available in various flavours’ as the poem ‘Charlotte Pudding’ has it) and of reacting against this (‘the mother is a stone’, as a line says in ‘Genealogy’). The conquest of the self lies in this double bind that a chameleon puts into practice on a daily basis.

The poems only appear naïve. They seem to have been written down as a direct reflection of performance poetry, but also effectively display sublayers hinting at greater coherence and themes. They are lyrical in the sense that their eloquence fans out in all directions with many surprising images, but also with a reprisal of images, such as the stone in varying contexts, which forces the reader to reread the book, to return to earlier poems.

Charlotte Van den Broeck holds an MA in English-German language and literature and is now studying Verbal Arts at the Antwerp conservatory. She twice reached the top 100 of the Turing National Poetry Prize and published in Het Liegend Konijn, Das Mag, De Revisor and DW B. She is already a household name as a performance poet. In 2015, on the advent of her debut volume Kameleon (Chameleon), she was added to the line-up of the Saint Amour tour through Belgium and the Netherlands. In 2016 together with Arnon Grunberg she opened the Frankfurter Buchmesse where Flanders and The Netherlands were Guest of Honour. Very recently her second collection Nachtroer (Night Helm) was published.
© Patrick Peeters (Translated by Willem Groenewegen)
Bibliography
Van kop tot teen (Woorden temmen, with Jeroen Dera). Grange fontaine, Rotterdam 2020
Waagstukken (prose) 2019
Kameleon (Chameleon). De Arbeiderspers, Amsterdam/Antwerpen, 2015.
Nachtroer (Night Helm). De Arbeiderspers, Amsterdam/Antwerpen, 2017.

a magician saws me in two and opens me up