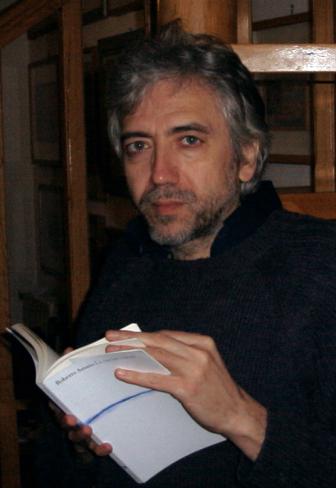 (Italy, 1953)
© Michele Amato
Biography
Roberto Amato was born in Viareggio where he lives and works. He is considered among the most original voices in contemporary Italian poetry. A late bloomer in writing, it wasn’t until the age of 50 that he published his first collection of poetry Le cucine celesti, which was awarded the prestigious Premio Viareggio-Repaci Prize in 2003. Amato is also a writer of literary criticism. His book L’agenzia di viaggi won the Premio Spallicci Prize in 2006. Amato contributes to leading Italian literary magazines such as Paragone and Nuovi Argomenti.
The general tone of (self-)irony and lightness that characterizes most of Amato’s work is, at the same time, funny and estranging. Some critics find his poetry too light and write about ‘verses like pigeons moving between heaven and earth but avoiding the firm ground’. But for those who read his poetry carefully, it becomes clear that these ‘pigeons which fly between two worlds’ are leaving us with essential crumbs of reality, question marks about the hereafter, phrases that recall the presence of Count Giacomo Leopardi, the famous 18th-century poet who died at the age of 37, as in Amato’s poem ‘Yesterday I visited the house of Leopardi’.

Amato is a master of irony, adept at evoking questions, reminiscences, coincidences and similarities rather than answers. Mostly avoiding rigid statements, with his clear-cut, semi-transparent verses and frequent rhetorical questions, he prefers to shine a light of doubt – an open questioning of things, rather than an offering of explanation. His verses hover, and strike a balance, between poetry and prose.

In the case of Amato, as Margherita Loy rightly observes, it is clear that poetry doesn’t always need to be thoroughly understood; it sometimes needs to be listened to. It needs to be ‘felt’, as for example the verses of Paul Celan or René Char, or the breathing of a loved one beside you.

Amato’s simple, melodic verses are irresistible and full of music. They possess a freshness that is rare and unique. He encourages his readers to approach but simultaneously leaves them with an enigma to solve. What is infinity? Where are our deepest thoughts moving, why do we feel alone and isolated sometimes, and is there a private place between heaven and earth? His poems are inhabited by women (Adele, Chiara and Silvia), by cities – in which one lives or travels to, and which are separated by metaphysical bridges – by huge libraries, by reflections about the end of the world.

The way Amato frequently uses figures of speech, such as rhetorical questions and ellipses, reinforces the naturalness of the language in his poems. He leads us gently on a trip to different cities, different worlds and places in time. The past is an essential part of the present, and so we meet Count Leopardi and his Silvia, and we meet Stefano Benni, famous Italian writer of fantasy prose, in a cafe below the sea level. In short, Amato makes us wonder about the world through his own, ever-wondering, eyes.
© Antoinette Sisto
Poetry
Le cucine celesti. Diabasis, Parma, 2003; winner, Premio Viareggio-Repaci Prize
Il disegnatore di alberi. Elliot, Roma, 2009
L’acqua alta. Elliot, Roma, 2012
Le città separate. Elliot, Roma, 2015

This past night I found myself drowning in quicksand I’d like to tell your husband: I believed I was me . . . and yet So very little time

This past night I found myself drowning in quicksand

I believed I was me

You may say that between me and you

We happened to enter unfamiliar places

The water is as green as an infusion

I don’t want anyone to accompany me beyond the bridge