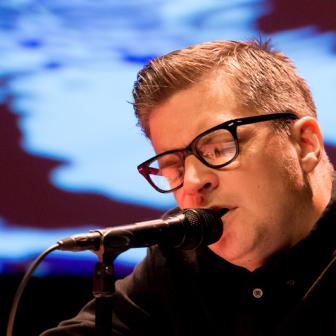 Having delighted us with his impressive performances at the Poetry International Festival in 2015, Norwegian poet Nils Christian Moe-Repstad will be joining us in Rotterdam again this year.  His poetry seems all-encompassing, like an encyclopaedia, or the whole of Wikipedia. Yet all the entries appear to have been shuffled, creating unusual but fascinating connections. The body plays a key role in his work. In his reflections on reality, from the microscopically small to the cosmically huge, the body is always the point from which he directs his gaze, and to which thoughts and ideas are tied. It seems only logical that the body should play such a key role in Moe-Repstad’s work, if we consider the fact that he broke his neck in a diving accident at the age of 19. While this personal disaster could only be sensed somewhere in the background in previous books, like 19 forgiftninger ('19 Poisonings'), in Wunderkammer, published in 2016, he bluntly and frankly highlights the paralysing consequences of his accident, with no bitterness and no reservations: ‘the world is unmoving and I move it with my head, like a footballer.’

Nils Chr. Moe-Repstad (Kristiansand, 1972) intended to become a mountaineer, but life had other plans. Constantly seeking out limits, he found them when he was paralyzed in a diving accident at the age of 19. Afterward, he spent a lot of time in libraries, began to read poetry and later to write it. Moe-Repstad continues to seek out limits but now in literature.His debut came in 1996 with Nå (Now), which was well-received; after this poetry collection came seven more. Moe-Repstad has collaborated several times with artists and musicians in his capacity as a poet. One of his most recent collections, the two-part Teori om det eneste (Theory of the singular), was recorded as a CD, on which Moe-Repstad reads his poems backed by the musicians Nils Petter Molvær, Eivind Aarset, Jan Bang and Erik Honoré. In the recording, Moe-Repstad’s delivery sounds thoughtful; you can almost hear how meticulously he writes his texts. The CD is accompanied by a full-length English translation (by Ren Powell) of the collection.

Moe-Repstad’s most recent collection, 19 forgiftninger (19 poisonings), was published in 2014. It covers poisonings in the broadest sense of the word: infections, viruses, epidemics, pollution, political corruption and economic exploitation. It deals with both concrete and metaphorical poisonings, poisonings in the past and the present, or both, such as in ‘Poisoning 2’:

Noah is a virus that has survived since biblical times. It remains encapsulated in Ararat mountain but turns up again in the present age when an archeological expedition conducts an investigation:

Not only are the subjects in 19 poisonings are wide-ranging, but the references to the Bible, literature, science, economics and history are also highly diverse. The Norwegian media often claims that Moe-Repstad asks a lot from his readers, labelling him an intellectual poet. But even if you don’t immediately recognize all the references and terms Moe-Repstad uses, his poetry still captivates with its threatening undertones: it grabs you by the throat and screams to be reread.