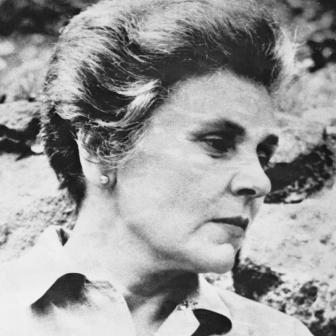 “Elizabeth Bishop’s work is witty, accessible and precise. And although Bishop published only 101 poems during her lifetime, it is nearly impossible to study poetry in America and not spend time with Bishop. Larry Rohter, writing for the New York Times, called her ‘one of the most important American poets of the 20th century,’ and she is certainly one of the most popular, as well. Bishop’s work continues to generate new criticism and conversation, such as in Marianne Boruch’s recent essay, ‘Melodrama’, that appeared in the December 2013 issue of Poetry.  In regards to Bishop’s most famous poem, ‘One Art’, Boruch notes Bishop’s ‘characteristic steel’ and the vulnerability that cuts through it. Bishop’s correspondence with Robert Lowell, published in its entirety in 2010’s Words in Air, was recently turned into the play Dear Elizabeth by the award-winning playwright Sarah Ruhl, and Bishop’s life in Brazil was the focus of the indie film Reaching for the Moon.”

Elizabeth Bishop was born in Worcester, Massachusetts, and had a turbulent childhood. She graduated Vassar College in 1934 with a degree in English, and went on to become a major American poet of the 20th Century. Making the most of her independent income, Bishop travelled widely throughout much of her life, which is often strongly visible in her writing. Her first book of verse, North & South, was published in 1946, and with it the world was introduced to one of the USA’s most acclaimed poets.

Bishop’s college years were of great importance to her later life. This was where she met Marianne Moore, a poet who would come to substantially influence her work. Another great influence was the poet Robert Lowell, although his ‘confessional’ style was considerably different to hers. Much of that friendship was maintained through letters, as Bishop spent nearly fourteen years living in Brazil with her partner Lota de Macedo Soares. Bishop’s writing has been described as “close to painting”, it has “detached, descriptive, deliberate, unmoved qualities”. Her poetry is known for its objectivity, description, and distant point of view. She used little of her personal life, and when she did always with discretion.

Bishop published the collection Poems: North & South. A Cold Spring in 1955, which contained the poems of her first collection in addition to eighteen new poems. This book of verse won her the Pulitzer Prize for Poetry in 1956. Other books by the poet are Questions of Travel (1965), and The Complete Poems (1969), among other texts. After leaving Brazil, the National Book Award-winning author lectured in higher education for a number of years in an effort to supplement her income once her inheritance began to run out. In 1976 Elizabeth Bishop was the first woman, and only American, ever to win the Neustadt International Prize.

Elizabeth Bishop has influenced poetry in the USA and around the world. Although she insisted her writing be excluded from collections of women’s poetry, her poetry can be found in a number of general anthologies. In fact, on composing one such anthology the poet Averill Curdy stated that “Elizabeth Bishop and Emily Dickinson seem to be the only poets on whom everyone agrees”. Bishop identified as a feminist, but not as a feminist poet, and wanted her writing to be judged for its own merit rather than on her gender or sexuality. Dozens of poets cite her work as a major influence for its precision, description, and its exquisite reflection of the minutiae of everyday life. Fellow poet Tom Sleigh cited Bishop’s influence for her “immersion in the physical world” and it is her concise, original, rendition of the world that she is remembered for. Only three years after attending the Poetry International Festival, Elizabeth Bishop died of a cerebral aneurysm in 1979.