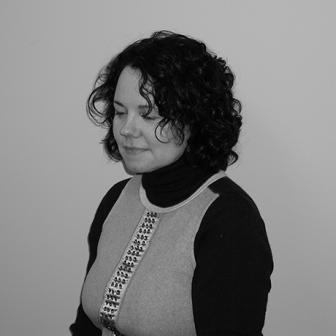 (United States of America, 1961)
© Averill Curdy
Biography
A lyric poet influenced by Donne, Hopkins, Merrill, and Auden, Averill Curdy notes, “In my own work, the aural quality and weight of words is very important and I think it’s partly an attempt to make them feel as material as the smears of color on a painter’s palette.” Her meditative, dense lines are smoothed by time; as Curdy explains, “I write slowly – always, it seems, at the very limit of what I know.”
Unfastened avidly from each ivory button
of her spine, the voluntary muscles open
virtuosities of red: Cinnabar

the mutagen, and carmine from cochineal
born between fog and frost, so many little
deaths Buddhists refuse to wear

robes soaked in its thousands.

Curdy’s poems push at the boundaries of the line, filling them with an abundance of consonants, scientific terms, or hyphenated adjectives. Her first book of poems focuses on early American explorers and naturalists, subjects that allow her to write expansively, with rich, archaic vocabulary and sensory details. Whether she’s writing about a settler at Jamestown in the seventeenth century or a sparrow trapped in the airport, Curdy gives equally detailed attention to the material and spiritual.

It is for you that I persist
In translating fresh birdsong, like this bunting’s
Comecomecome wherewherewhere
All together      down the hill.
(Where did they go, who went before us?
Starved trove: scatter of blue beads & a name
Grafted to that bald acre.
Roanoke.
There is my terror & my tale: to go west
Under this eternity of nameless trees.)

(from ‘Ovid in America’)

Curdy began to write poetry seriously in her thirties, a few years after her mother’s death. Early in her writing career she took a workshop with Ed Hirsch, whose encouragement motivated her to pursue writing further. She earned an MFA at the University of Houston and a PhD at the University of Missouri. Curdy co-edited, with Lynne McMahon, The Longman Anthology of Poetry (2006) – a painstaking task during which she found that “Elizabeth Bishop and Emily Dickinson seem to be the only poets on whom everyone agrees.”

She has won the Rona Jaffe Foundation Writing Award, a Pushcart Prize, and fellowships from the National Endowment for the Arts and the Illinois Council for the Arts. She has also won a Lannan Writing Residency Fellowship. She lives in Chicago and teaches at Northwestern University.
, POETRYFOUNDATION.ORG
Bibliography
Song & Error, Farrar, Straus & Giroux, New York, NY, 2013.

SPARROW TRAPPED IN THE AIRPORT