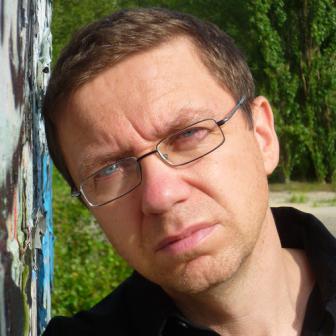 (Germany, 1962)
© Nadja Kuchenmeister
Biography
The poems of Norbert Hummelt leave a gentle, melancholic impression. Nevertheless, he is a disruptive factor in contemporary German poetry – precisely because of his unfashionableness. He began as an experimental poet in the vein of Ernst Jandl and Thomas Kling, writing ‘pick-ups’ in which he assembled fragments of overheard conversations without a lyrical subject being involved. He also played with all kinds of writing techniques. In 1992, Hummelt changed direction when he found himself compelled to start writing in the first person about his own experiences and memories.

In his new style of poetry, he recalled family members (including his father who died when he was 16) and interiors and landscapes from his childhood in Rijnland. Later, he wrote about relationships, his daughter, travels and walks – for example in the vast Mark Brandenburg near Berlin where he has lived since 2006. However, these autobiographical elements are not the most important aspects. His poems depict recognizable human experiences such as security and threat, and the fleeting nature of time: ‘and each of us just dreams and drifts onwards.’ Past and present are linked at unexpected moments. Real life experience is intertwined with nature, the seasons, history, art and mythology. The titles of his newest collections, Totentanz and Pans Stunde speak volumes.

Norbert Hummelt, who as a Germanist and Anglicist, essayist and anthologist, is at home in Western literature, has translated T.S. Eliot, W.B. Yeats and Inger Christensen, amongst others. His influences are as diverse as the conflicted Friedrich Hölderlin, the romantic Joseph von Eichendorff, form-obsessed Stefan George, modernists James Joyce (epiphany, interior monologue) and Gottfried Benn (metaphysics with a foundation of realism).

Hummelt regularly uses lower case letters and quirky punctuation. He writes blocks of text whose lines are approximately the same length and fluctuate, where there is friction between the broken lines and the continuous verses. Sound and rhythm are essential elements for him – he sees the often hidden rhyme as the engine of the poem. He doesn’t like metaphors. He believes that concreteness renders his poetry ‘transparent, allowing it to open before the eyes of others who can connect their own representations to it,’ as Hummelt wrote in his 2009 book, Wie Gedichte entstehen.

PAN IN THE REEDS