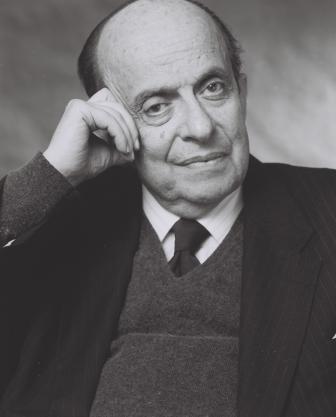 (Argentina, 1925 - 1995)
© Pieter van der Meer
Biography
Roberto Juarroz (Coronel Dorrego 1925–1995 Temperley) was an Argentine poet famous for his "Poesía vertical" (Vertical poetry).
Roberto Juarroz published fourteen volumes of poetry in all, numbered successively 1 to 14, under the general title "Poesía vertical", the first appearing in 1958 and the final one posthumously in 1997. A fifteenth volume was edited by his wife, the poet and critic Laura Cerrato, and published after his death. W.S. Merwin published a bilingual selection of Juarroz' poems in 1977 (Kayak Books) which was re-issued in an enlarged edition in 1987 (North Point Press), both volumes entitled Verical Poetry. In 1992 Mary Crow published her translations of the later work as Vertical Poetry: Recent Poems (White Pine Press), which won a Colorado Book Award. In 2011 Crow's translations of a selection of Juarroz' final poems will appear as Vertical Poetry: Last Poems (White Pine Press).

, Wikipedia
In 1990 and 1993 Roberto Juarroz was a guest at the Poetry International festival in Rotterdam. You can listen to recordings of his poetry made on these occasions.