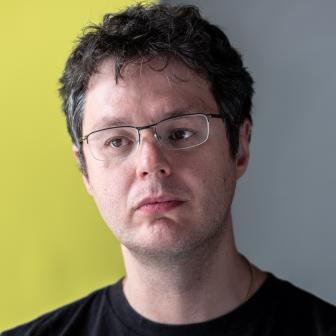 "Everyday life is a wonderful thing and to be quite honest it is all we have.” To Ilya Kaminsky, poetry is about creating a parallel reality, and thus creating freedom. He was born in Odessa, in the former Soviet Union (now Ukraine), but he and his family moved to the US in 1993. Like Raymond Antrobus, who was at last year’s festival, his deafness was overlooked in early childhood. Kaminsky's characters are often deaf, and yet they make love and dance against all the odds, oblivious to what is being said about them, and failing to hear any orders that may be issued. Kaminsky has a keen eye for the absurdity of existence, writes openly about cruelty and atrocities, but always remains engaged as an observer. With love and optimism, his poetry turns the other cheek. Violence and coercion are met with love, dance and music. His second collection Deaf Republic is regarded as "a contemporary epic”, “a remarkable book of poems”. Author Garth Greenwell calls Kaminsky "the most brilliant of his generation, one of the world’s few geniuses”.

Poet Ilya Kaminsky was born in the former Soviet Union city of Odessa. He lost most of his hearing at the age of four, and at the age of 16 moved to the United States when his family was granted political asylum in 1993. They settled in Rochester, New York, and after his father’s death in 1994, Kaminsky began to write poems in English. He explained in an interview with the Adirondack Review that he chose English precisely because his family and friends didn’t know it: “no one I spoke to could read what I wrote. I myself did not know the language. It was a parallel reality, an insanely beautiful freedom. It still is.”

With language at once ecstatic and plain, Kaminsky’s poems span ages and voices to summon the stuff of life: love, grief, joy and laughter. “His poems move through the lives of others, known and unknown, connecting the sweet and bitter stories of lost worlds,” notes E.M. Kaufman in Library Journal. Kaminsky’s first full-length collection, Dancing in Odessa, won the Tupelo Press Dorset Prize, the American Academy of Arts and Letters’ Metcalf Award and ForeWord Magazine’s Best Poetry Book of the Year award, and has been translated into French and Romanian.

Jane Hirshfield, writing for Ploughshares about Dancing in Odessa, states that Kaminsky’s poems are “intricate, muscular, startlingly powerful.” She points to Kaminsky’s “inventiveness of language, the investigative passion, praises, lamentation, and a proper sense of the ridiculous.” Kaminsky’s inventiveness is highly present in Deaf Republic, a book-length poem which he has described as a fairytale-in-verse that takes place in a country “where hearing does not exist.” What’s most strikingly new about Kaminsky’s work though, is how he can turn familiar images and phrases into those utterly unexpected, as in section 9 of Deaf Republic:

I am not a poet, Sonya, I inspect
the fragrant feet of younger ladies –

holding her breasts
in her hands like two small explosions.

I am her boy drowning.
In this country he does not know

the word for “drowning” and yells:
“I am diving for the last time!”
Here, even the word “drowning” is renewed, charged even, with intent of a wholly different sort. As Kaminsky says, “Imagination is a great gift to any poet, I think. Somehow poets forget it these days in their relentless search for irony in things. That, I think, is a mistake.”

Kaminsky’s poems can feel removed from time, as if they exist parallel to it – aware of it but somehow without it. Even in this passage from the second section of Deaf Republic, where the experience of time is addressed, it’s addressed as “moments” – spots of experience that, in the world of Kaminsky’s poem, are broken:
It has begun: they climb the trolleys
at the thief market, breaking
all their moments in half
It’s unclear if “they” are intentionally breaking “their moments in half” or if it is the act of climbing the trolleys that causes the breakage. In this way, there is no emotion assigned to the breakage of experience – it is neither tragic nor revelatory. Much of Deaf Republic continues in this way, with full, sometimes rapid happenings that are free from the heaviness of assigned emotion, which is not to say the poems are emotionless. Rather, it is clear that important things are happening; the phrase “it has begun” is repeated again in the first section, an indicator that something life-altering is occurring:
It has begun: I saw how the blue canary of my country
picks breadcrumbs from each soldier’s hair
picks breadcrumbs from each soldier’s eyes.
Rain leaves the earth and falls straight up as it should.
To have a country, so important,
to run into walls, into streetlights, into loved ones, as one should.
No matter what else is happening in Kaminsky’s poems, be it the death of a family member or a military takeover, we are never without the landscape of the everyday:
Running by windows where women bought lemon and fish and garlic,
to the right madame Gornik painted icons sold at morning,
to the left lived Veronina, mother of two boys
who stole tomato sandwiches from her boys.
We stuttered and drank and laughed like barefoot peasants
and also drank quietly, damning only the earth and quietly
we made vodka from cherries, vodka from wooden chairs.
In an interview for the Boxcar Poetry Review, Kaminsky stated, “There is only one thing I demand from my own lines, or from any poetry I love – I want to read it and to have a sense of having lived. I want to find a texture of life in the lines.” Lemon, garlic, tomato sandwiches, and chairs – these domestic items certainly add the “texture of life” to a section titled “9AM Bombardment”. As the speaker’s brother tells him in section 4, “‘You must speak not only of great devastation / but of women kissing in the yellow grass!’”

Kaminsky earned a BA in political science at Georgetown University and a JD from the University of California’s Hastings College of the Law. With Paloma Capanna, he co-founded Poets for Peace, which sponsors poetry readings across the globe to support relief work. He has also worked as a clerk for the National Immigration Law Center and for Bay Area Legal Aid. Kaminsky’s honors include a Whiting Writers’ Award, the Milton Center’s Award for Excellence in Writing, the Florence Kahn Memorial Award, Poetry magazine’s Levinson Prize as well as a Ruth Lilly Poetry Fellowship, Philips Exeter Academy’s George Bennett Fellowship and a Lannan Foundation fellowship. He co-edited, with Susan Harris, the Ecco Anthology of International Poetry (2010), and edited and co-translated Polina Barskova’s This Lamentable City (2010). He is a former director of the Harriet Monroe Poetry Institute at the Poetry Foundation and has served as the editor of the online journal In Posse Review. He teaches at San Diego State University and is editor-in-chief of their print journal (which shares this website’s name)  Poetry International.
© Poetry Foundation

THE TOWNSPEOPLE WATCH THEM TAKE ALFONSO

WHILE THE CHILD SLEEPS, SONYA UNDRESSES

BEFORE THE WAR, WE MADE A CHILD

THAT MAP OF BONE AND OPENED VALVES

AS SOLDIERS MARCH, ALFONSO COVERS THE BOY’S FACE WITH A NEWSPAPER

IN A TIME OF PEACE