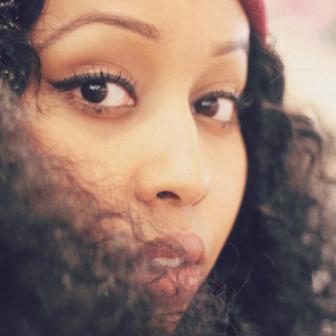 (Kenya, 1988)
Biography
Warsan Shire showed her first poem to her father at the age of 11, won an international poetry slam at 16 (“I didn’t really understand what a poetry slam was”), writes intense, sensuous poems which she has toured and read in several countries, has a BA in creative writing, published her first pamphlet in 2011, is poetry editor of the new “literary arts mashup” magazine, Spook, and runs workshops on using poetry and narrative to heal trauma. And she’s not yet 25.
Born in Kenya in 1988 to Somali parents, Warsan Shire was raised and still lives in London. Her work draws from both English and African culture; it is distinguished by its warmth and generosity, by its attention to the youth and humanness of previous generations – a great sense of continuity runs through her world view – and, above all, by a detailed and instinctive attention to how we experience life through our bodies. She writes about sex, war, sex as war, cultural assumptions and conflict, desire, love, mutilation, birth, death, previous generations – an astonishing range of subjects, treated with great emotional depth.

Her poems have appeared in journals and magazines including Poetry Review, Wasafiri and Sable LitMag, and at the time of writing she is shortlisted for the first Brunel University African Poetry Prize. In 2011 her pamphlet, teaching my mother how to give birth, was published by flipped eye.

It seems fair to say that as a London poet, Warsan Shire represents a new kind of Englishness, which the current generation of 20-somethings can take almost for granted – certainly in the cities. It’s an Englishness that admits all races and creeds, joined by shared culture (music, films, poetry) and tolerant of specific differences. It incorporates and accepts a different kind of experience from its grandparents – whether they were in the UK or in some other country. Thus, Shire’s poems – with their strong sense of time and place and person, and without the ironic, distanced, traditionally English (and maybe more ‘male’) pose – speaks to a very real and urgent sensibility whose time is now. ‘Grandfather’s Hands’ encompasses several of these themes:

Your grandmother kissed each knuckle,

Your grandfathers hands were slow but urgent.
Your grandmother dreamt them,

a clockwork of fingers finding places to own –
under the tongue, collarbone, bottom lip,
arch of foot.

She uses her work to both celebrate and document the lives of women: in relationships, in various kinds of trauma, in war, in daily life. Her poems are rooted in the life of the body, but it is a body strongly connected to the soul and to other people. Her poems are about how we live with and in ourselves – in the case of so many women, as objects. They’re also about love: who, what, why, and above all how we love. Her list poems about relationships are sharp and funny, even while poignant.

In ‘Tribe of Wood’, a mother addresses her daughter, whom she took for ‘circumcision’, saying, “women like us can’t afford to be weak”, and “your mother meant well”:

I gave my daughter to a man
an offering that made my stomach tight
with want, he spread her limbs across the town
I prayed she felt something,
wriggled underneath him like
the women across the border,
I listened out to hear her moan
but I heard nothing . . .

This ability to be in the mind of the mother committing what we in the West would consider an atrocity demonstrates Shire’s ability to encompass what she documents. It is not surprising that her workshops deal with trauma and healing; this poetry is moving, and healing in its presentation of shared humanity and struggle.

Her pamphlet is titled after a Somali proverb. In it, life parades through sisters and mothers and grandmothers, aunts and cousins and brothers and uncles. As in Wordsworth, whose “child is father to the man”, in Shire’s work each of us creates the mother in the other. She told Indigo Williams:

I’m the eldest in my family, my mother literally learnt how to mother, how to sacrifice, how to grow up, how to be alone, through me. I began writing the book when I was 19 years old. She was also 19 when she gave birth to me . . .

She has also said, in the same interview: “I think in Somali, I cuss in Somali, when I’m afraid I reach for Somali and this language is very rich, very filling. It’s an unflinching language; the crudest most terrible things sound perfectly normal in Somali.” Her poems contain lines of Somali, but more than that they are infused with Somali poeticism, and this comes through in her clear, musical, image-driven English. But the poems in her pamphlet encompass things that do not “sound perfectly normal” in any language. ‘Conversations About Home’, for example, is subtitled ‘(at the Deportation Centre)’:

God, do you know how difficult it is, to talk about the day your own city dragged you by the hair, past the old prison, past the school gates, past the burning torsos erected on poles like flags? When I meet others like me I recognise the longing, the missing, the memory of ash on their faces. No one leaves home unless home is the mouth of a shark. I’ve been carrying the old anthem in my mouth for so long that there’s no space for another song, another tongue or another language . . . I tore up and ate my own passport in an airport hotel. I’m bloated with language I can’t afford to forget.
© Katy Evans-Bush
Bibliography
teaching my mother how to give birth, flipped eye, London, 2011

CONVERSATIONS ABOUT HOME (AT THE DEPORTATION CENTRE)