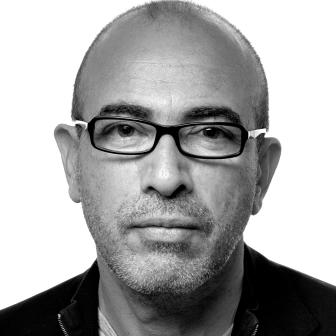 (Morocco, 1959)
© Pieter van der Meer / Tineke de Lange
Biography
In the foreword to Emmanuel Moses’s Selected Poems, translator Kevin Hart stresses the inimitable capriciousness of his poetry. Emmanuel Moses is a poet who succeeds in eluding all attempts at pigeonholing. This elusiveness begins with his biography; Moses was born in Casablanca, Morocco in 1959, moved at a young age to Paris, only to rehouse with his family to Jerusalem when he was ten. After completing his studies in history, he returned once more to Paris where he still lives and works. Besides poetry, he also writes novels and works as a translator.
In 2013 Emmanuel Moses’s collection Ce jour-lá was published by the renowned Parisian publisher Galimard. He has published a great deal of work, including translations of C.K. Williams, Yehuda Amichai and Peter Huchel and he has been awarded a number of prizes, including the Prix Max-Jacob and the Prix Nelly-Sachs.  Moses comes from an intellectual and artistic family; his father is the French Israeli philosopher Stéfane Mosès, his mother is the artist Liliane Klapisch, and one of his great grandfathers was the German writer Heinrich Kurtzig.

Moses’s poetry is as rich and varied as his life and makes use of many different forms. He has written extremely short poems, but also very long ones. His language is sometimes measured and restrained, but at other moments it is evocative and luxuriant. Some of his poems are lyrical, while others are more like short stories. Although this quality is never foregrounded, his work is imbued with a great erudition and a wide knowledge of the history of various cultures.  A typical feature is his humour, which is optimistic while not glossing over social ills. Moses combines his treatment of everyday scenes with a mild absurdism that gives the reader a subtle impression that forces are at work. One gets the feeling that these forces, though barely perceptible, are nonetheless present and are still important.

ANOTHER PORTRAIT OF D.

‘Miracles do happen,’
You said
Looking out across the garden
Where a chair that had been left outside
The whole night, was almost dry.

The humour and realism in Moses’s work has the effect of bringing one down to earth. The almost, but never entirely, everyday images in Moses’s poetry serve to anchor his work; Moses is careful to make sure that his poems don’t become vague or free-floating.

He had an intense, inner experience.
That of homogenous plurality.
After which he put the onion back on the table.

Time and again the elevated and the profane are in close proximity in his poetry, and sometimes he succeeds in capturing them in a single description. When a man dies, for instance, “angelic pieces of excrement” are found in the toilet bowl. The pleasingly promising and impending doom often go hand in hand:

Night falls
The smell of fresh chestnuts
And burning wood.

Like his life, the characters in Moses’ poems rarely stay still. There is a great deal of travel to other places and other times. In this way different worlds have an impact on each other. Throughout the wide range of atmospheres and images, there is one important unifying element and that is Moses’ balanced language. His language and style are so lucid that they give the mysterious every opportunity to reveal itself.

MR. NOBODY AS THE LAST MOUNTAINEER