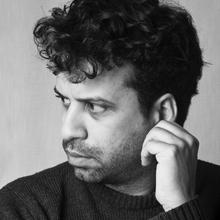 (Brazil, 1978)
© Fernando Branquinho
Biography
Márcio-André became the first radioactive poet in the world in 2007, when he gave a poetry performance that lasted for hours in the still dangerously radioactive ghost town of Chernobyl. He made a name for himself as a translator, an anthologist and the joint founder and editor of the publishing house Confraria do Vento and the legendary Brazilian webzine for poetry and culture, Confraria (March 2005–February 2009). Since 2009, he has lived in Lisbon, and in 2010 and 2011 he was the organiser and presenter of Cidade aTravessa, a series of literary multimedia events in Rio de Janeiro, São Paulo and Lisbon.

He makes appearances as a poet and as a sound and image artist at festivals, exhibitions and site-specific events in many countries, employing different media such as video art, installations, performances and visual and sound poetry. All these activities are inseparable from his experimental approach to poetry, which he treats as a dynamic multimedia process that only genuinely comes alive in performance.

Márcio-André has also published poetry collections and essays, and his work can be found in poetry anthologies and journals in many languages. He is one of the best-known names of the ‘geração 00’, a ‘generation’ of poets who made their debut in or shortly after 2000, but who otherwise had little in common. Their work was varied, and, later on, they also developed in different directions. While they did not form any official group or movement, there was a boom at this time in poets who carried out their activities in the big cities, forming an exceptionally energetic poetry circuit and reacting against the former canon of big names from the period between the 1920s and the military dictatorship and the interventionist poetry of the years after that.

After completing his studies in literary theory (poetics) and philosophy, Márcio-André published his debut collection Movimento perpétuo in 2002, following it in 2003 and 2006 with the chapbooks Música quantica and Cazas. His most recent collection, Intradoxos, dates from 2008. Since then, he has published new work on his blog, in magazines and on the Internet. In 2011 an expanded edition of Cazas was published.

In his own ‘ordinary’ poetry, experimentation is also a dominant ingredient. Intradoxos, the most thoroughly worked-out collection, is actually a single long poem, a cosmogony of the word intended to be read back to front and which is full of erudite allusions and visual and typographical effects. The style varies from haiku-like notes to Poundian cantos, and the collection takes up and develops previous poems in the best language-laboratory tradition.

No one, however, should be surprised to see Márcio-André take off his lab coat and start performing with an electric violin, a choir and a battery of sound processors or a video installation. After all, poetry must be live.
© Arie Pos (Translated by Donald Gardner)
Bibliography

for an animal’s sake

a salmon pierces the afternoon with a fish quietude

knife in the water

her voice throughout the sea is the sea crossing itself

here from the belly of this whale

the day rises in golden fury