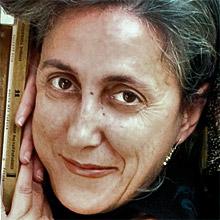 (Spain, 1955)
© Andrea Costas
Biography
A central figure in contemporary Galician poetry, poet, essayist and political activist Chus Pato (María Xesús Pato Díaz) is part of a literary culture that flourishes in the northwest of the Iberian Peninsula. There, the Galician language has long resisted the centrist administrative and social pressures that still threaten it today.
With a growing reputation as a “poet of the nineties” for her incisive feminist and independentist verse, Pato’s sixth book, m-Talá, broke the poetic mould in 2000, and attracted readers inside and outside Galicia. Hordes of Writing, the third text in her projected pentology Method, was award the national Spanish Critics’ Prize for Galician Poetry in 2008, and the Losada Diéguez literary prize in 2009. In Hordes, Pato continues to refashion the way we think of the possibilities of poetic text, of words, bodies, political and literary space, and of the construction of ourselves as individual, community, nation or world.

Pato’s poetry wriggles out of usual forms of the poem, and even out of the confines of the single book. It topples lyric convention and, in a headlong rush of grammatical and lyric fractures (involving theatre, radio, dialogues, diaries, reminiscences, myth, and history) Pato brings us face to face with the traumas and migrations of Western Europe. She confronts us with questions of writing itself, and the possibility that poetry can account for our animal selves – selves who will die.

“The poet is someone whose muse has been integrally destroyed,” writes Pato. But there is always a remnant, she says, and from this remnant the poet picks up the pen again, and keeps writing. “Rather than letting the world into my writing,” says Pato, “I kick writing out into the world.” Her works – such shock mechanisms – have made her one of the most revered and iconoclastic figures in Galician and European literature.
© Erín Moure
Bibliography

This journey starts with a letter I never managed to write

What matters isn’t what I could feel

She keeps on the cloud path

The voice was panic