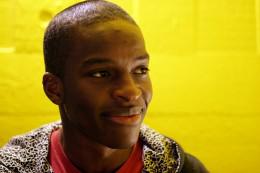 (Zambia, 1987)
© Kim-Leng Hills
Biography
With powerful nuance and great emotional depth, Kayo Chingonyi’s poems are informed by an enthusiasm for music as well as literature. A fellow of The Complete Works programme for diversity and quality in British Poetry, he was awarded the Geoffrey Dearmer Prize in 2012, was the Associate Poet at the Institute of Contemporary Arts from Autumn 2015 to Spring 2016 and has held many residencies including ones at Cove Park and First Story.

Chingonyi is a creative facilitator as well as a writer and performer and he also works as an emcee, producer and DJ. He is the poetry editor of the White Review. Chingonyi has published two pamphlets: Some Bright Elegance and The Colour of James Brown’s Scream. Chingonyi’s first full-length collection, Kumukanda (Chatto & Windus, 2017), was shortlisted for the Costa Prize for Poetry and the Roehampton Poetry Prize and received the £30,000 Dylan Thomas Prize 2018, with judge Michael Sheen calling it “a stunning and hugely culturally relevant collection of poems that keenly explore black culture, masculinity and identity in Britain today.”

Born in Mufulira, Zambia in 1987, the poet moved to Newcastle, UK at the age of six and is currently based in West Yorkshire. He went to school in London, read English Literature at the University of Sheffield and completed an MA in Creative Writing at Royal Holloway, University of London. His presence on the poetry scene was first felt in 2003 when he won the Poetry Society’s Rise Youth Slam Championship (now SLAMbassadors UK) and went on to work as a workshop leader for the project.

The importance of music is obvious in both his pamphlets: “Music is the first art form that moved me as a small child […] I can’t help but think through the world using music and the poems are a record of that fixation” (Poetry London). As a teenager he avidly collected music on cassettes and fancied himself as a rapper: “k to the a to the y to the o, / lyrical G with a badboy flow” (‘Self-Portrait as a Garage Emcee’). Rap lyrics, with their metre, rhyme and complex allusions are just one of Chingonyi’s many influences: “My work is always trying to achieve a balance between the written and oral traditions of literature, and so it makes sense to bring together traditional canonical poetic forms with forms which are a part of their own canon, to create a canon of my own.”

Chingonyi’s debut full-length collection, Kumukanda, looks at the nature of inheritance, exploring personal and shared identities. In the central sequence ‘calling a spade a spade’ Chingonyi explores ideas of otherness and separateness, racial slurs and stereotyping through lyrics and dramatic monologues. The idea of masculinity and transition is a central theme and the book takes its title from an initiation ceremony of the Luvale people in Zambia which marks the coming of age for young men. These are also poems which give voice to grief in all its complexities:

Kid brother, we breathers have made an art
of negation, see how a buckled drum
is made from a man’s beating heart
and a fixed gaze is a loaded weapon.

But the joy of music and dance steps in time with the pain of loss and throughout the book we see what Kurt Heinzelman calls “vexed celebration”, for instance in the vivid evocation of an imperfect but vital urban environment.

In 2018 Chingonyi was appointed Assistant Professor at Durham University. He is currently writing a hybrid book of essays that “deal with notions of autobiography, cultural criticism, music, migration and other issues that sit in the middle of my life.” As well as this, he’s continuing to work on his next collection:
Interview in Poetry London

calling a spade a spade

The last night of my 20s

The frequency of longing