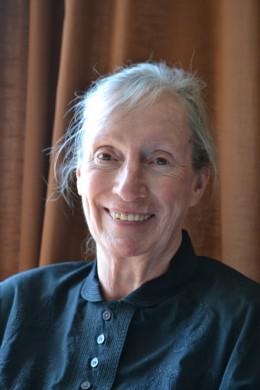 (South Africa, 1933)
Biography
For the past four decades Wilma Johanna Stockenström has been enriching Afrikaans literature with her satirical, obstinate and compassionate voice. Along with Elisabeth Eybers, Sheila Cussons, Ina Rousseau and Antjie Krog, she remains one of the most important women writers in Afrikaans.

She was born on 7 August 1933 in Napier in the Overberg district, where she also completed high school in 1949. She studied at the University of Stellenbosch, obtaining a BA (Drama) in 1952. She worked as a radio announcer in Cape Town for a year before moving to Pretoria in 1954 where she married Ants Kirsipuu, an Estonian by birth and a language philosopher by trade. For a while she worked as a translator and later as an actress. She has been living in Cape Town since 1993.
Her earliest writing – and her first love – was in the field of drama: two one-act plays, Katlagters (Babblers) and Op deurreis (Passing Through) published in the literary magazines of the time, Wurm and Contrast. These were followed by Dawid die dik dom kat (Dawid the Fat Dumb Cat) and Trippens se patatta, (Three-penny’s Worth of Batata) which were published by DALRO (The Dramatic, Artistic and Literary Rights Organisation). However, it was only with the 1978 publication of Laaste middagmaal (Last Meal at Midday) that she received attention as a serious dramatist.

She played parts in a variety of productions, including Hugo Claus’s Bruid in die môre (A Bride in the Morning), Ionesco’s The Chairs, and Chekhov’s Drie susters (Three Sisters). She later achieved fame for her film and television appearances in Manakwalanners (Namakwalanders), Hoggenheim Edms Bpk (Hoggenheim Pty Lt.), Die besoeker (The Visitor; 1977) – Athol Fugard’s drama on the life of the Afrikaans author, scientist and morphinist Eugène N. Marais – for which she was awarded the Rapport-Oscar. This was followed by Die perdesmous (The Horse Trader; 1982), Verspeelde lente (Lost Spring; 1983), Die storie van Klara Viljee (The Story of Klara Viljee; 1992), Friends (1993), and Promised Land (2002), which is based on Karel Schoeman’s homonymous novel.

The poet acknowledges that writing poetry began as a lark, yet soon she was appearing in local literary journals alongside contemporaries like Wilhelm Knobel, Phil du Plessis, Casper Schmidt and Marie Blomerus. When Wilhelm Grütter approached her about the possibility of publishing a volume of poetry, Stockenström had only twelve poems ready for publication. He proposed using beautiful paper and typesetting the manuscript in a large font. Wilma playfully suggested calling it Vir die bysiende leser (For the Near-sighted Reader). This throwaway line later proved a fitting and astute title to the collection with which she made her poetic debut in 1970. Published initially by Rijger, a small independent press, this slim volume might have gone unnoticed were it not for the expert eye of poet and critic D.J. Opperman. He convinced the major publishing house, Human & Rousseau, to acquire the publication rights, to buy up the remaining stock, and to cultivate her as important voice.

Stockenström’s early style and themes arrived as if fully formed, unadorned and devoid of affectation and poetic fashion. Rhyme, conventional musicality and traditional forms were abandoned in favour of more sober language and a strongly ironic stance. Her individual approach to syntax reveals a strong Germanic influence. In this, as in her love of coining new words, she has a strong affinity with the rebel poet, Peter Blum, most likely born in Trieste. Her poems spring from the “stony bedrock of birth and death” which is Africa, immediately relevant, intense and interwoven with the politics, prehistory, myths and folklore of the continent.

I mistrust words. With the heraldry
of poetry they embroider horror into heroic
deeds in quartered hues
snapping gaudily. The house of betrayal
is adorned with words.

(from ‘I Mistrust Words’)

In another poem from Monsterverse (Monster Poems), her fourth volume, she states that for her poetry is “the most dispensable of commodities”. On the one hand she distrusts words, because they can only express the desolateness and futility of the human condition (“man is fucked-up seed”), but at the same time the medium allows the poet, like the primitive rock artist in arguably her most famous (and fiendishly difficult to translate) poem ‘The Eland’, to reach out with her “hand which gives life living hand”, thus wrenching it from oblivion.

Man is himself both creature of “oblivion” and of “lustre”, aware of his imperfection and mortality, and that there is “nothing as unremarkable as the birth of man”, yet at the same time, in a poem like ‘Arrivals and Departures’ (referencing Rilke’s ‘Duino Elegy 9’), she is aware of the wonder and beauty of existence:

once I was human.

In contrast to the often self-centred poetry of previous generations, Stockenström’s work focuses more on the human condition. The poems in Monsterverse reflect a cosmic mindset, frequently displaying a pantheistic world view. Central to it all is man: alone, surrendered and surrendering to an indifferent cosmos, at times comic in his braggadocio:

So there he stands with tender parts exposed,
man, fool, big actor.

He is creator of oblivion, bringing about civilisations which glitter and disappear in the greater cycle of the cosmos. He is insignificant, and yet avaricious in his relationship with the earth, inhuman with his fellow man, full of self-conceit and hubris. He is just another example of the monsters populating her poetry, but just maybe the strangest of them all:

Man? Forget him. Leave him.
Measured against all that is bigger
all that is smaller in the All
he barely registers and just now
it will be finish and klaar. Full stop.

this hairy tube of blemish and glory,
a folly of dejectedness.

Stockenström\'s fiction has also received significant acclaim. Like Henriëtte Grové before her, she received the prestigious Hertzog prize in two different genres, the second woman to do so. Stockenström\'s award came for poetry in 1977 and  fiction 1991.

In 1983, Nobel Laureate J.M. Coetzee translated her novel Die kremetartekspedisie into English as The Expedition to the Baobab Tree, expanding her reach to an international audience. Translations followed in Dutch, French, Hebrew, German, Italian and Swedish. In 1997, she was invited by the Dutch Language Union to participate in poetry readings in the Netherlands and Flanders. In 1998 she received the Grinzane Cavour Prize for the Italian edition of Die kremetartekspedisie. In 2007 she was awarded the Afrikaans Unlimited Kanna for her contribution to Afrikaans literature at the Klein Karoo National Art Festival.

Wilma Stockenström has an undeserved reputation as a difficult, hermetic poet. Yet her inimitable poetry is accessible and offers a stimulating reading experience. There is no poet in Afrikaans that can sensibly be compared to her. With Monsterverse she created a body of poems which holds its own next to other great volumes of poetry in Afrikaans, like N.P. van Wyk Louw’s Tristia (Tristia) and Komas uit ’n bamboesstok (Comas from a Bamboo Stick) by D.J. Opperman.

In the middle of 2010, a rare and fortuitous discovery of her poem, Skoelapperheuwel, skoelappervrou (Butterfly Hill, Butterfly Woman), was made in a printer’s basement! This poem, illustrated by the gifted South African artist, Judith Mason, had gone missing in production back in 1988. Some thirty copies were launched at the recent Mail & Guardian Literary Festival in Johannesburg to the great delight of Afrikaans poetry lovers.
© Johann de Lange
Bibliography

Audio of Stockenström in discussion with Wim Brands, appearing on vpro boeken

Kneel in my embrace

THE COMET VISITS THE CAPE OF RAPE

Therefore do not let me go

THE SKULL LAUGHS THOUGH THE FACE CRIES