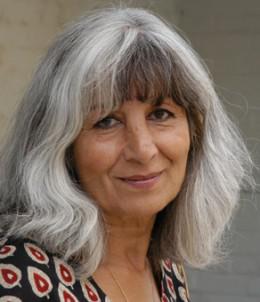 (Iran (Islamic Republic of), 1944)
© Mimi Khalvati
Biography
Mimi Khalvati was born in Tehran, Iran, but grew up in England, and has made London her home. She was educated at the University of Neuchâtel, in Switzerland, and at the Drama Centre and SOAS in London. Her poetry, published by Carcanet, has amassed critical praise and been translated into nine languages. The Financial Times named her latest collection, The Meanest Flower (2007), as one of their books of the year; the UK Poetry Book Society made it one of their quarterly recommendations, and it was shortlisted for the T.S. Eliot Prize.
Khalvati is recognised as one of Britain’s foremost contemporary exponents of traditional forms, from ghazals to sonnets. David Morley, reviewing The Meanest Flower, commented how

In these new poems the contours of form are not simple verbal patterns or the aural equivalent of after-images in the art of versification; their contours of form create and evoke the contours of real emotion. [ . . . ] Khalvati makes poetic form reach humanly towards the reader, the living hand of the poem held always towards us. (Poetry Review, 97:4, Winter 2007/8)

Despite the formality of their exterior worlds, Khalvati’s poems often revolve around informal domestic moments and the interior spaces of everyday life; as shown in poems such as ‘The Piano’, ‘The Coat’ and ‘Moving the Bureau’ (The Chine), or in ‘Motherhood’ and ‘Sundays’ (The Meanest Flower). In ‘Sundays’, Khalvati’s controlled lines turn the setting of a Sunday dinner into a poignant elegy to a friendship affected by physical disability.

The combination of Khalvati’s formal skill and her ability to see beyond the periphery of the ordinary electrifies her poems. The Chine (2002) includes a series of poems rooted in the landscape and architecture of Isle of Wight where Khalvati grew up. The title poem, ‘The Chine’ (named after a famous geological feature on the Isle of Wight), skilfully blends the magic of the past with the day-to-day:

Every childhood has its chine, upper world
and lower. Time itself seems vertical
and its name too implies both bank and stream.
To be back on the island is to walk
in both worlds at the same time, looking down
on talus, horsehair fern notched through the Ice Age,
Stone Age, Bronze Age and still here at our heels

A great enabler and encourager, Khalvati has become a quietly influential figure in British poetry for her work both on and off the page. In 1997 she co-founded The Poetry School, which has helped build up a thriving community of writers, through expert evening classes and short courses, in London and across the UK. She is the co-editor of three of its anthologies of new writing, Tying the Song (2000), Entering the Tapestry (2003) and I Am Twenty People! (2007), published by Enitharmon Press. She has been a fellow at the Royal Literary Fund at City University, the International Writing Program in Iowa, and the American School in London. She was the recipient of a Cholmondeley Award, in 2006, and an Arts Council Writers’ Award in 1995. Khalvati was also one of the Poetry Society’s writers in residence in 2000, as part of the Poetry Places project, taking poetry to the sorting-offices of the Royal Mail.

Before poetry became her main focus, Khalvati worked as an actor and director in both the UK and Iran; and she founded the pan Persian–British organisation, Theatre in Exile. More recently, she has translated the work of Kajal Ahmad with Choman Hardi, (Poems, Kajal Ahmad, Enitharmon, 2008) from the Kurdish. She lives in Hackney, in east London, and is a Visiting Lecturer at Goldsmith’s College.

The poet and critic Marilyn Hacker commented: “Mimi Khalvati is a prolific and courageous poet who has produced what for some would be a lifetime’s body of work in a short decade. The Chine, her fifth book, is a marvel of generosity, which mirrors the contours and contradictions of the poet's history.” Moniza Alvi, writing in Poetry Wales, commented, “I am convinced that while we may tire of brasher voices, Mimi Khalvati’s work will endure.”

A volume of new and selected poems will be published by Carcanet in 2011.
© Naomi Wood / Rebecka Mustajarvi
Bibliography

On a Line from Forough Farrokhzad