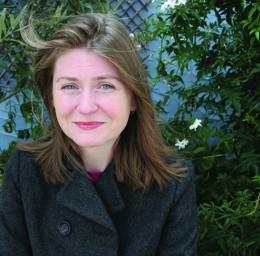 (United Kingdom of Great Britain and Northern Ireland, 1968)
© Jemimah Kuhfeld
Biography
Deryn Rees-Jones was born in Liverpool in 1968. She read English for her undergraduate and Masters degrees at the University of Wales, Bangor. Her anthology Modern Women Poets (Bloodaxe, 2005) was widely praised and followed on from her doctoral research at Birkbeck College, University of London. Presently, Rees-Jones teaches at the University of Liverpool and is the co-founder of its centre for Poetry and Science.
Rees-Jones won an Eric Gregory Award in 1993, and an Arts Council of England Writer’s Award in 1996; she was also named one of the Poetry Book Society’s Next Generation poets. She has been a judge for the TS Eliot Award, the Costa Poetry Prize, and, this year, the National Poetry Competition for the Poetry Society.

The Memory Tray, Rees-Jones’ first volume of poetry, was shortlisted for the Forward Prize for Best First Collection in 1994. The volume “dives headlong into love and faithlessness, memory and desire with enjoyable abandon. The best poems have a memorable taste,” wrote William Scammell in the Independent on Sunday.

“The pick of the crop, a magician with attitude, pinning ideas down but at the same time giving them time to breathe,” Ian McMillan wrote, in Poetry Review, about her second collection, Signs Round a Dead Body, which was a Poetry Books Society Special Recommendation.

Her third collection, Quiver – a murder mystery set in the docklands and Chinatown of Liverpool – is a book-length, narrative poem, about a poet who unwittingly becomes a murder suspect. The poet George Szirtes wrote that Quiver has “passion, freshness, sheer energy”.
© Naomi Wood
Bibliography