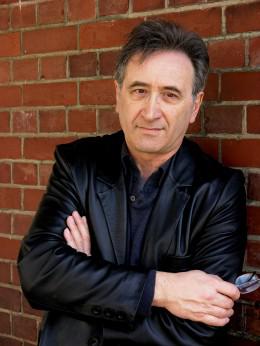 (Hungary, 1948)
© Clarissa Upchurch
Biography
George Szirtes was born in Hungary in 1948, but fled during the Hungarian Uprising of 1956 to England, where he studied at the art academies of London and Leeds before establishing himself as a painter. In addition, he wrote poetry. His first collection The Slant Door, written in his adopted mother tongue, appeared in 1979.
In Szirtes’ work the tension between his continental European background and English culture, which sometimes seems difficult to reconcile, can be clearly sensed. It is no coincidence that he has written two separate collections entitled The Budapest File (2000) and The English Apocalypse (2001).

Furthermore, his background as an artist also plays a role in his poetry – there is often a striking visual component. He himself refers to his poems as buildings and, via the use of metre and rhyme, gives them strong formal characteristics. In his most recent collection, Reel (2004), he also includes sonnets and poems of three-line stanzas. These stand out in English literature because of their very light, hard-to-localise accent.

His poems often have an unsettling side-effect – they seem to cast a covert look at the end of time. Critics have sometimes seen a link between his work and that of Kafka. Take for example the poem ‘Yellow Star’, which is based on a photograph, in which the birth of Christ is linked in an intriguing and suggestive manner with the Holocaust. Szirtes also finds apocalyptical characteristics in present-day culture. The poem ‘Arrival’, for example, in which the reader is led into a deathly quiet town, is such a typical Szirtes poem – full of alienation and homelessness. Often the reader does not really know what is going on, but feels a subdued tension.

Apart from being a poet and a painter, Szirtes is also active as a writer of plays and libretti, and as a translator of Hungarian literature. He also teaches at the Norwich School of Art and Design and the University of East Anglia. He has been awarded various prizes for his work.
© Rob Schouten (Translated by John Irons)
[George Szirtes is to appear at the 2009 Poetry International Festival, Rotterdam. This text was written for this occasion.]

PETERSEN: KLEICHEN AND A MAN

Three poems from \'IN THE FACE OF WAR: POEMS ON PHOTOGRAPHS\'