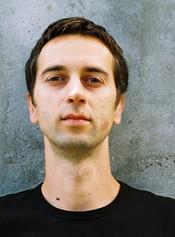 (Germany, 1973)
© Juliana Henrich
Biography
Ron Winkler was born in 1973 and lives in Berlin and Jena. He broke through as a poet in 2004 with the collection vereinzelt Passanten (Here and There Passers-by). Berlin Verlag published his collection Fragmentierte Gewässer (Fragmented Bodies of Water) in 2007, followed by Frenetische Stille (Frenetic Silence) in 2010.
Ron Winkler writes for a generation in which “from birth onwards / nearly everybody inhabits a telephone”. In his poetry he demonstrates in a sometimes hilarious, sometimes unsettling way how an ever greater part of what in the previous century we used to call ‘reality’ for the sake of convenience, has been expanded and shrunk to a virtual universe in which the tactile and audible are constantly zapped, sampled, filtered and twittered. The consequence is that “on a word level, our thought collapses into fragmented, labyrinthine and ridiculously large-scale concepts”. Winkler’s poems seize their chance in this area. He defines them as poems in which “the security protocols meant to guarantee the regular paths of communication have been disabled”, as poems which are “hyperlinks to a reality of one’s own making”. In this self-made reality Winkler operates with humour and irony, Googles and juggles with words, and always manages to beat a path, with unexpected twists, through to poetry’s eternal themes:

say we’re coated with digital lacquer. and that
there’s no such thing as angora concrete. only love, arranged in
a blizzard of feelings.

Winkler is the founder of the poetry magazine intendenzen, of which there have been eleven issues so far. He is also creating a furore as a poetry translator, and he recently edited Schwerkraft (Gravity), an anthology of poetry by young Americans.

In 2005, Winkler received the Leonce-und-Lena poetry prize. The jury report made mention of his successful attempt “to update the nature poem and make it function as a frame of reference for modern experience”, while the jury of the 2006 Mondseer Lyrikpreis proclaimed that “Ron Winkler has managed to put the rock & roll back into poetry.”
© Ard Posthuma (Translated by Michele Hutchison)
Ron Winkler was a guest at the 41st Poetry International Festival. This text was written for that occasion.

NIGHTS IN THE ALL-CONQUERING MEDIUM