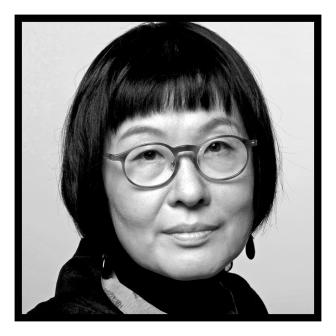 (South Korea, 0)
© Tineke de Lange en Pieter Vandermeer
Biography
Kim Hyesoon, winner of the prestigious Griffin Poetry Prize in 2019, is one of the most important contemporary poets of South Korea. She lives in Seoul and teaches creative writing at the Seoul Institute of the Arts. Kim began publishing in 1979 and was one of the first few women to be published in a literary journal, Munhak kwa jisŏng (Literature and Intellect). This journal and Ch’angjak kwa pip’yŏng (Creation and Criticism) were the two leaders of the intellectual and literary movement against the US-backed military dictatorships of Park Chung Hee and Chun Doo Hwan in the 1970s and 1980s.
Kim began to receive critical recognition from the late 1990s. She believes that the recognition of her work was due to the strong emergence of women’s poetry over the past few decades. Kim has won numerous literary prizes and was the first woman to receive the coveted Midang (2006) and Kim Su-yŏng (1998) awards named after two major contemporary poets. Midang was a poet who stood for “pure poetry” (sunsusi) while Kim Su-yŏng’s poetry is closely associated with “engaged poetry” (ch’amyŏsi) that displays historical consciousness.

Kim’s poetry goes beyond the expectations of established aesthetics and traditional “female poetry” (yŏryusi), which is characterised by its passive, refined language. In her experimental work she explores women’s multiple and simultaneous existence as grandmothers, mothers, and daughters in the context of Korea’s highly patriarchal society, a nation that is still under neo-colonial rule by the US. Kim’s poetics are rooted in her attempt to resist conventional literary forms and language long defined by men in Korea. According to Kim, “women poets oppose and resist their conditions, using unconventional forms of language because their resistance has led them to a language that is unreal, surreal, and even fantastical. The language of women’s poetry is internal, yet defiant and revolutionary.”
© Don Mee Choi
Kim Hyesoon, featured at the 51st Poetry International Festival in Poets on Stage, read at the 41st Festival. This text was written for her earlier appearance in Rotterdam.


Links
Feature article about Kim and her international reception in the Yonhap News
Joel Scott reviews Kim Hyesoon’s poetry, as well as the poetry written by her translator Don Mee Choi, at Cordite.
Jacket2 review of Kim’s Mommy Must be a Fountain of Feathers
Interview with Kim in Guernica
Johannes Göransson writes about Kim, Rebecca Loudon and Maroso di Giorgio at the Poetry Foundation

THE SALT DRESS INSIDE ME