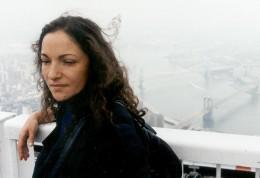 (Colombia, 1951)
© Gonzalo Márquez Cristo
Biography
Amparo Osorio is a major Spanish-language poet who has also written fiction and essays. She is editor of the literary review Común Presencia; co-founder of the Literary Foundation Común Presencia, an institution for cultural research, data collection and dissemination; co-founder of the weekly webzine Los Conjurados, which has 60,000 subscribers; and co-founder of the Colombian division of World Poetry Day. She is also co-director of the international literary imprint Los Conjurados. Her poems have been translated into several languages and she has visited many countries as an ambassador of the review Común Presencia.
The adventure of reading Amparo Osorio’s poetry begins with the wind sculpting faces while a “you” (simultaneously representing the psychoanalytic you, the masks of the ego and the vocative second person) observes the grass and ignores the traces of “all eternity”. “Outside of you there are no roots possible”, the voice states before posing the question that not only concludes the first poem but which will become the leitmotiv of this collection from which surges – like sparks springing up from the forgery of existence – remnants of childhood, reflections on origin, longings to identify oneself with fleeting time, reunions with loved ones and memories of annihilated gods. And all of this conveyed in a sorrowful tone but without complaints; with bitterness but without lamentation.

Hers are not exclusively literary texts; they also convey the voice of a woman facing the vicissitudes of human affairs: a fine voice, a poetical voice, capable of approaching and penetrating the dark side of existence, astounding us with its findings.
© Jorge Nájar (Translated by Nicolás Suescún)
Poetry