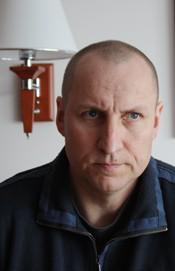 (Lithuania, 1965)
© Aurelija Cepulinskaite
Biography
“I cannot state that comparing the Bible to magazines with nude women is so easy but the fact that I was always interested in God and woman is true. These two topics are the point everything begins from, everything exists and everything ends with.”

Sigitas Parulskis will perhaps not be all that happy that this quotation of his is hauled out yet again, but it would certainly seem to exemplify his work. At present, Parulskis is one of the most popular writers in Lithuania. He is a poet; a writer of prose, screenplays and drama; a translator, essayist and critic. He has been awarded the most prestigious Lithuanian prizes for his work, including an award for the best literary debut of 1991 for his poetry collection Iš ilgesio visa tai (All of This from Longing).
Sigitas Parulskis was born in Obeliai, a country village in North Lithuania that formerly had a considerable number of Jewish inhabitants. In his poetry, which is mainly in free verse, images from his childhood in the country frequently recur, although, in his attitude towards traditional rural life, issues that are often considered ‘sacred’ are for the most part de-mythologised, while what is considered ‘lesser’ is often made into the stuff of poetry. In addition, there are often references in his poetry to world literature and Antiquity, as can be seen in the poems ‘Poetic Interest’ and ‘Telemachus at Odysseus’ Grave’.

The content of Parulskis’ plays is often determined by symbolic situations that remind one of parables, imbued as they are with references to religion and theology. Furthermore, Parulskis is fascinated by death, as was clearly evident in his prize-winning collection of poetry, Concerning Death.

His experiences while serving in a parachute regiment of the Soviet Army in the GDR were also used as a point of departure in his best novel, Trys sekundės dangaus (Three Seconds of Heaven).

[Sigitas Parulskis is to appear at the 2009 Poetry International Festival, Rotterdam. This text was written for this occasion.]