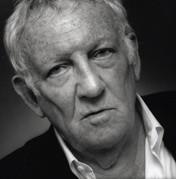 (Belgium, 1929 - 2008)
© Pieter Vandermeer
Biography
Hugo Claus was the wonder boy of Flemish literature for more than half a century. Apart from being an extraordinarily productive and highly regarded poet, he was an equally productive and regarded writer of stories, novels, film scripts, libretti and plays, as well as a stage and film director, an artist and a translator. He wrote more than a hundred literary works, with which he won more than forty literary prizes. His extreme versatility earned him the nickname ‘the Wizard’. For the kaleidoscopic diversity of his output he was dubbed the ‘Proteus of Dutch letters’.
His poetic output, running to over 1,300 pages, is a plethora of forms, styles, themes, even poetics. He once said in an interview: ‘It’s like the swing of a pendulum, a process of mutual fertilisation. After a collection of difficult poems has come out, you can count on the next one being a carnival.’

Hugo Claus made his début as a poet in 1947 in a rather traditional manner, with a volume of confessional poetry, which he published on his own. In Paris in the early 1950s he came into contact with existentialism and surrealism, and with artists of the CoBrA group, such as Asger Jorn and Karel Appel. In Paris he also met some of the Dutch experimentalist poets of the Vijftigers group: Gerrit Kouwenaar, Lucebert and Remco Campert. Immersed in ‘the cult of the spontaneous’ he produced several volumes of experimental verse, of which De Oostakkerse gedichten (Poems of Oostakker, 1955), is generally rated highest.

From about 1960 Claus began to allow more of the outside world and current events to enter into his poetry, witness the outspoken social involvement in volumes such as De geverfde ruiter (The Painted Horseman, 1961) or Van horen zeggen (Hearsay, 1970). With social involvement came a growing interest in the (literary) past: references to and quotations from other poets became more frequent and overt, for example in Het teken van de hamster (The Sign of the Hamster, 1963), as did his use of historical and encyclopædic sources. A fine illustration of the latter is his volume about the fifteenth-century Flemish painter Hugo van der Goes, Heer Everzwijn (Mister Boar, 1970). He also ‘rewrote’ some of Shakespeare’s and Dante’s poetry (Sonnetten, 1988) and classic Sanskrit verse (‘Nu nog’ in Alibi, 1985).

His later collections, De sporen (Traces, 1996) and Wreed Geluk (Cruel Happiness, 1999) display his full poetic range: next to moving autobiographical poems such as ‘Broer’ (Brother) and ‘Oostende’ (Ostend) there are complex, intertextual ‘rewrites’ and text montages, satirical occasional poems, doggerel rhymes and poems commenting on other poems, or on a photograph or work of art. All the themes from his earlier work – time, motion, transience, consciousness, corporality, sexuality, language and tradition, return. The jury awarding him the Netherlands’ most prestigious poetry prize, the VSB Prize, in 1994, spoke of ‘impressive, many-voiced poetry, generous, rich, unhampered by conventions of fashion or good taste’.
© Erik Menkveld (Translated by Ko Kooman)
[Hugo Claus took part in the Poetry International Festival Rotterdam 1999. This biography has been adapted from a text written on that occasion.]


Links
The Clauscentrum at the University of Antwerp is a research centre on the works of Hugo Claus. The website includes articles in several languages on Claus and a complete bibliography of Claus’ works in Dutch and in translation (In Dutch).

Hugo Claus on Lyrikline (In English).

Translator Paul Vincent looks back at the life and works of Hugo Claus (In English).

ENVOI WHAT TO SPEAK ABOUT POET STILL NOW WEST FLANDERS

WHAT TO SPEAK ABOUT