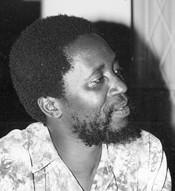 (Zimbabwe, 1956 - 2015)
Biography
Born near Zvishavane in 1956, poet, novelist and social commentator Chenjerai Hove lived in exile in Europe toward the end of his life. His critical social and political commentary in the weekly newspaper The Standard (2000-2002) gave rise to threats that he was forced to take seriously. For a creative writer who cared deeply about his country’s welfare, leaving was a moment of profound loss. And yet for a writer for whom ideals were central, such loss was intensified by what he believed to be a betrayal of governance in an independent Zimbabwe.
Chenjerai Hove’s four volumes of poetry – Up in Arms (1982), Red Hills of Home (1985), Rainbows in the Dust (1998) and Blind Moon (2003) – reflect the progression of his ideas and experiences from the hot anger and challenge to colonial repression, through the scrupulous observation of the effects of liberation war on rural communities, to disillusion and bitterness over the failure of the new government’s promises.

Hove’s writing is infused with his belief in the people for whom he bears witness, and informed by the excoriating pain of injustice. The Red Hills of Home drew on Hove’s deeply felt moral anguish over the brutalities of Zimbabwe’s war of liberation (1967-80), which he observed while teaching in the rural areas during the period. His first novel, Bones (1988), which won the Noma Award, shows the depth of his empathy for rural people and in particular rural women.

If Hove was a nationalist, he was also a fearless observer and outspoken social and cultural critic, and never shied away from recording the violence of the new Zimbabwe in his fiction, poetry and journalism. Along with the novels Shadows (1994) and Ancestors (1996), Hove’s other work included two collections of articles written for newspapers: Shebeen Tales (1994) and Palaver Finish (2002), and Guardians of the Soil – meeting Zimbabwe’s elders (with Ilija Trojanow) (1996).

a poem for Zimbabwe

on being asked for a ruling party membership card