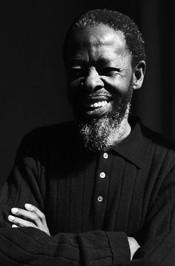 (South Africa, 1938 - 2018)
Biography
Born in 1938, Keorapetse ‘Willie’ Kgositsile left South Africa in 1961 as one of the first young ANC members instructed to do so by the leadership of the liberation movement. He was a founding member of the ANC Department of Education as well as that of Arts and Culture. The recipient of many poetry awards, he has also studied and taught Literature and Creative Writing at a number of universities in the United States and in Africa.
Willie Kgositsile’s poetry ranges from the unambiguously political and public to the lyric and confessional. In addition to his unique poetic voice, he is also a gifted teacher. Among his publications is an excellent book on teaching the craft of poetry – not the ‘what’ but the ‘how’.

A strong feature of his work is the recognition and celebration of his influences, his friendships with other artists and, in particular, his deep love of blues and jazz. His poetry scintillates and throbs with quotations from songs, references to music and, most importantly, to musicians themselves, including Billie Holiday, Nina Simone, B.B. King, Otis Redding, John Coltrane, Art Blakey, Gloria Bosman, Johnny Dyani, Hugh Masekela and Pharoah Sanders. In fact, by including jazz references Willie is following a jazz practice of quoting from one tune while improvising on another.

Extra-textual references abound in his art and are included with some confidence that the audience is familiar with them. When Billy Collins or Robert Berold refer to Thelonious Monk or John Coltrane, the assumption must be that a knowledge of their music will enhance the reception of the poems or, at least, make the reader curious enough to do the research. And yet the poems should be, as Willie's are, accessible without prior knowledge.

Kgositsile’s collection If I Could Sing offers us a clue that, like many poets, he recognises music as the purest of art forms. The title carries a wistful sense of a yearning to be a musician. This, if true, is ironic, since one of the most notable characteristics of his verse is its own subtle musicality. A short sample from one of the poems, ‘Santamaria’ (from the collection This Way I Salute you), demonstrates this. In ‘Santamaria’ the musician referred to is the Afro-Cuban drummer, bandleader and composer of ‘Watermelon Man’, Mongo Santamaria. In the second stanza drumming is evoked:

and, like Mongo Santamaria, Keorapetse Kgositsile "commands us to the bidding/ of the polyrhythmic dance".
© Gus Ferguson

Random Notes to My Son