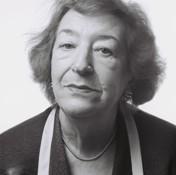 (Italy, 1924)
© Tineke de Lange
Biography
Maria Luisa Spaziani was born in Turin, but has for several decades been living and working in Rome. It was Eugenio Montale who encouraged her early poetic efforts. Her first book of poetry appeared in 1954 and was followed at five-year intervals by many more.
From the very start Spaziani’s poetry was marked by classical elegance and impeccable versification. The autobiographical element in her early poems gradually gave way to a more narrative and argumentative content. The two trends come together in her recent cycle La traversata dell’oasi (Crossing the Oasis, 1998). Remarkably enough, this comprehensive cycle – fifty-four poems of two or three quatrains each – did not appear as a book, but in Poesia, an unpretentious monthly magazine, on sale at the (better) news-stands. Even more remarkable was that here was a lady well advanced in years, who exposed to the public a love poetry as fervent as that of an adolescent, but shaped by wisdom and experience.

Spaziani has taught French literature and has published many critical studies, notably on French drama since the eighteenth century. She also has many translations to her name.

She is president of the Centro internazionale Eugenio Montale, which confers a prestigious poetry prize.).
© Karel van Eerd (Translated by Ko Kooman)
[Maria Luisa Spaziani took part in the Poetry International Festival Rotterdam 2000. This text was written on that occasion.]