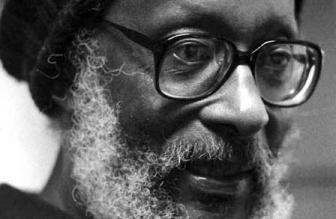 (Barbados, 1930)
Biography
Edward Kamau Brathwaite came to Britain in 1949, where he read history at Cambridge University. His first poems were published in Poetry from Cambridge (1951). From 1955 to 1961 he lived in Ghana, where he worked as a government education officer and wrote textbooks for schools.
In 1961 he returned to the Caribbean. For thirty years he taught history at the University of the West Indies (Jamaica campus). From 1965 to 1968 he again lived in Britain, where he founded the Caribbean Arts Movement (CAM) in 1966. His doctoral thesis, The Development of Creole Society in Jamaica, was published in 1971. After returning to Jamaica he took an active role in the civil rights movement there.

Brathwaite wrote many long poems, including Rights of Passage (1967), Masks (1968) and Islands (1969), collected in The Arrivants (1973), Mother Poem (1977) and Sun Poem (1982). He wrote for the stage, worked for BBC radio and started the literary magazine Iouanaloa. His poetry, inspired by African oral tradition, has a marked rhythmic quality and expresses a strong personal commitment. As a historian, Brathwaite went in search of the African roots of the Caribbean people, with the aim of formulating a common identity.

Kamau Brathwaite is now professor of comparative literature at New York University. More information about him can be found on the NYU Website.
© Robert Dorsman (Translated by Ko Kooman)
[Kamau Brathwaite took part in the Poetry International Festival Rotterdam 1975. He was invited again for the festival in 1999, but had to cancel his participation. This text was written for the 1999 festival.]