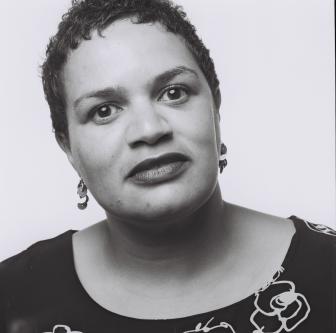 (United Kingdom of Great Britain and Northern Ireland, 1962)
© Tineke de Lange
Biography
Jackie Kay is a poet, playwright and novelist. She was born in Edinburgh, Scotland, and raised in Glasgow. However short, Jackie Kay’s poem ‘Someone Else’ adequately summarizes the central theme of her poetry and much of her other work.
A brief resume of her life could read: born from a short-lived affair between an African sailor and a Scottish nurse; adopted by a liberal couple of ‘ban-the-bombers’ in Glasgow. A pervading thought in her work is that she could very well have been a different person, had she not been brought up by this particular couple. This consideration is most outspoken in her first collection of poems, The Adoption Papers (1991). In the title cycle, she alternately speaks with the voices of the adoptive mother, the natural mother and the daughter.

The theme of identity also dominates Kay’s novel Trumpet (1998): after his death, the celebrated jazz trumpeter Joss Moody – significantly the son of a black father and a Scotswoman – turns out to be a woman. Apart from his wife, no one in his entourage knew his true sex. Unlike the adopted child, the man/woman in Trumpet deliberately chooses to be someone else.

In Kay’s poems, the theme of being someone else recurs in ever different shapes. To a certain extent, one is able to determine one’s own life by making extreme choices. Many poems take the form of dramatic monologues by imagined characters who, as they speak, give their lives a different turn. Sometimes Jackie Kay borrows a voice from a fellow adoptee, like the blues singer Bessie Smith. But the conclusion is always the same: you could have been somebody else.
© Peter Nijmeijer (Translated by Ko Kooman)
[Jackie Kay took part in the Poetry International Festival Rotterdam 2002. This text was written on that occasion.]

SOMEBODY ELSE THE PAST