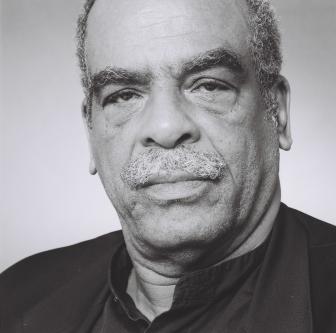 (Martinique, 1928)
© Pieter Vandermeer
Biography
Édouard Glissant was born in Martinique, an Antillian island which the French government purchased from a group of French settlers in 1664. Martinique, therefore, can be said to have been \'French\' about two centuries longer than the city of Nice, which was not added to France until 1860. Glissant won a scholarship for the lycée at Fort-de-France, where he became a disciple of his countryman, the poet Aimé Césaire, who founded the Négritude movement to promote African culture free of colonial influences.
He continued his literary and political education in Paris, where he went to study philosophy at the Sorbonne and ethnology at the Musée de l\'Homme.

From his début collection Un champ d\'îles (An Expanse of Islands, 1953) Glissant has consistently striven to capture the essence of the Antillian people in verse, novels and essays with ever increasing accuracy. Les Indes (The Indies, 1956) is a lyrical epic in six sweeping cantos painting the history of Martinique. The poem follows Christopher Columbus as he puts to sea from the port of Genoa and then relates how the colonizers kill off Martinique\'s original population and repopulate the island by bringing in slaves from Africa. Remarkably, Glissant does not call for vengeance but propounds a vision that has the persecutors and the persecuted eventually merge in brotherly unity.

As a Martiniquan, Glissant is torn between two worlds: administratively his island is part of France, whereas geographically it belongs to the Caribbean region; the official language is French, but the vernacular is Creole. Born at one side of the Atlantic Ocean, he is a descendant of negroes dragged across from the other side. Glissant sees the Antillian\'s identity, culture and history primarily as a product of his multiligualism and multiracialism. His entire oeuvre is a plea for a quasi-utopian unification of African and European heritages.

From 1982-1988 Édouard Glissant directed the UNESCO Newsletter. Since then he has taught literature at the City University of New York.
© Jan H. Mysjkin (Translated by Ko Kooman)

[Édouard Glissant took part in the Poetry International Festival Rotterdam 1999. This text was written on that occasion.]