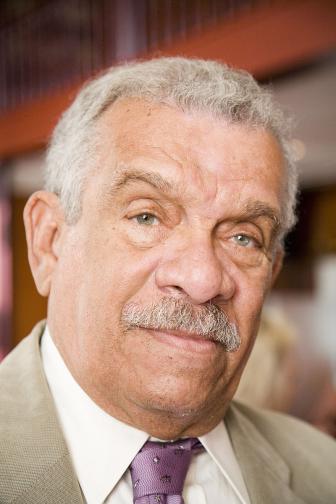 (Saint Lucia, 1930 - 2017)
© Bert Nienhuis
Biography
Derek Walcott was born on St. Lucia, one of the small Windward Islands. His father, a civil servant who painted and wrote poetry, died when Derek and his twin brother were one year old. Their mother, Alix, was a teacher of English. The Walcotts were English-speaking Methodists in an island that was predominantly Roman Catholic and where the common language was a Creole French patois.
Walcott, in one of his poems, describes himself thus:

I'm just a red nigger who love the sea
I had a sound colonial education
I have Dutch, nigger and English in me,
and either I'm nobody or I'm a nation.

The 'sound colonial education' was provided by a Methodist school and prepared Walcott for a three-year course at the University College of the West Indies in Jamaica. In 1957 he won a Rockefeller Foundation scholarship to study theatre in New York. He subsequently went to live in Trinidad, where he formed The Little Carib Theatre Company, which later became the well-known Trinidad Theatre Workshop.

Between 1959 and 1962 Walcott worked as a journalist, while writing plays and poetry. In 1981 he was appointed Professor of Creative Writing at Boston University, but rather than settling permanently in the United States he chose to commute between Boston and Trinidad.

In 1992 Derek Walcott was awarded the Nobel Prize for Literature. The jury report praised him as the 'Caribbean Homer', in refererence to his 8500-line epic poem Omeros, in which he retold the dramas of Homer's Iliad and Odyssey in a 20th-century Caribbean setting. The Russian Nobel laureate Joseph Brodsky wrote of him in The New York Review of Books: "The great poet of the English language is a black poet." In his essay on Walcott, 'The Sound of the Tide', Brodsky advances the theory that the literature of a realm in decline flourishes anew at the periphery of that realm. In the way that Greek culture fertilized the culture of ancient Rome, English literature is being revitalized in the West Indies (or, for that matter, India, as in the case of Salman Rushdie). The countries and islands of the West Indies, says Brodsky, "were discovered by Columbus, colonized by Britain, and immortalized by Walcott."

Walcott has no axe to grind with his region's former colonial rulers, although he has a keen ey for racial discrimination and the subtler forms of racism. However, one only needs to recall his loving portraits of the British "Major" Plunkett and Maud, his Irish wife, to realize that he bears no grudge towards the white race as such.

Many of the poems in his collection The Bounty (a title referring as much to the rich natural beauty of 'his' island as to the English armed transport ship remembered for the mutiny of her crew) are about his mother, beautifully portrayed in her frail old age in Omeros, now remembered after her death.

A sense of guilt pervades these poems, towards his mother, for not loving her enough in her lifetime, and towards his poor little island, for leaving it so often for so long, returning to it almost as a stranger.

For all its baroque beauty and its wealth of imagery, Walcott's later poetry remains essentially elegiac in tone.
© Jan Eijkelboom (Translated by Ko Kooman)
[Derek Walcott took part in the Poetry International Festival Rotterdam 1989 and was to take part again in 1999, but had to cancel. This text was written on the occasion of the 1999 festival.]

THE LIGHT OF THE WORLD