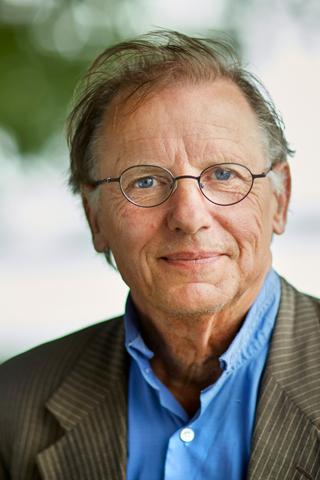 (The Netherlands, 1951)
© Mark Kohn
Biography
Willem Jan Otten is a poet, essayist, novelist and playwright. All his work is strongly related in content; he writes about the great questions of life and death, belief, the origins and purpose of life, but also about private experiences involving guilt, desire, lust and jealousy. After his début collection Een zwaluw vol zaagsel (A Swallow Filled with Sawdust) he published twelve more, each one a new, personal orientation towards, mostly moral, questions of life.
In Willem Jan Otten’s recent work, our gaze is always guided through our familiar reality to explore another reality, one that transcends our own experience and perception. This is also the case in Genadeklap (Coup de grace), Otten’s first new collection in six years. Clearly religiously motivated, in Otten’s case this perspective is informed by his Catholicism. It makes his work highly reflective and introspective, yet without losing sight of everyday and worldly concerns. This shows in his poems’ images, which are always clear and recognizable, and their language, which takes on many different registers: exalted, sharp, colloquial, musical, abstract, and direct.

The poems deal with liminal experiences like loss and impending death, but also with the love for a spouse, both in contemporary daily life and in the classic story of Penelope and Odysseus. The way in which Otten manages to put into words the complexity of feelings that are constantly in flux is a testament to his profound empathic powers. All Otten’s poems in one way or another deal with the question of how to live a fulfilling life, and he reveals that fulfillment consists of both desire and surrender. Genadeklap poses crucial questions about reality and about humanity’s place in the great cosmology of which our reality is but a small part.

Otten’s poetry is clear in meaning and musical in tone – flowing like the water he lovingly writes about – and decidely essayistic in content. It is a poetry of seeking, a poetry which circles around the intangible and the absent, around what is missing and what missing implies. In his volume Paviljoenen (Pavillions, 1991), Penelope’s love for Ulysses is implied in missing: “Wanting you is missing you. It was missing at first sight.”

Otten often begins his poems with a concrete image, which then soars to great, often mythological heights. While retaining its symbolical, at times explicitly metaphysical content, his language over the years has grown simpler, more intimate, more sober in form. “The best lines are the ones that make you wonder if they're still poetry,” he says. In his collection Eindaugustuswind (Late August Wind, 1998) he links his poetry, even more than before, with water. Water, flowing like life itself, on which, alone in his boat, he can withdraw in silence:

The season open
trying to be of ear
and not the one who
breaks what carries him away.

Deep down in his poetry, Otten knows how hard it is to reconcile the will to understand that which carries away with the desire to leave it intact. In Eindaugustuswind, he cautiously begins to accept the state of not-understanding as that which may truly free the soul. Soul-searching, much as the poet would want it to, cannot provide all the answers. “Do not clarify this,” he writes, and “because I cannot comprehend myself/ as trying to comprehend – that is why I am free”.

In Dutch:
Otten at the Koninlijke Bibliotheek (The Dutch Royal Library)

AN ARM THAT NEVER DID NOT LIE ON HIM