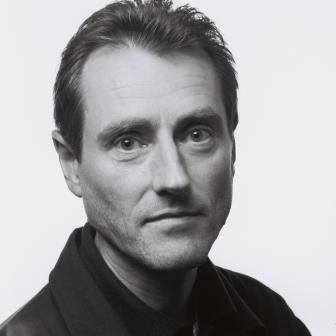 (The Netherlands, 1958)
© Pieter Vandermeer
Biography
K. Michel can hardly be said to be a prolific writer. Since his debut in 1989, Ja! Naakt als de stenen (Yes! Bare as the Stones), only four more collections of poems have appeared: Boem de nacht (Boom the Night) in 1994, Waterstudies (Water Studies) in 1999, Kleur de schaduwen (Colour the Shadows) in 2004, and Bij eb is je eiland groter (Your Island is Bigger during Ebb Tide) from 2010. Nevertheless, his work has attracted attention from the very outset; for Boem de nacht he was awarded the Jan Campert Prize, for Waterstudies no less than the Herman Gorter Prize and the VSB Poetry Prize.
K. Michel is a poet who is able to view the world and life from an unforced but not for that reason naive point of view. This ‘open’ and often surprising look produces poems in which unusual connections are made, as for example between the coming into existence of the earth and human sleep convulsions, or in which he muses on such things as:

Complex processes: when I go barefoot
over the tiles towards the balcony,
my nose begins to sneeze

In clear, transparent language he dishes up for the reader a world he was unprepared for – one in which language begins with ‘Ouch’ or in which the Hofvijver palace lake in the Hague stands on end and its fish gaze out over the city. Here and there, his poems are like skipping songs, compilations of what at first sight appear to be dissimilar things, out of which he seems to express a wonderful kind of randomness. All in all, his work is wise and playful, but above all light in tone. Even existential problems are not given a place in the lecture room but in the playroom. About the feeling of freedom, for example, he writes ‘oho you cry/ that’s not for you to dictate/ that has to be my choice/ otherwise it doesn’t count/ fine you say/ decide for yourself then.’

Recognisable and strange, everyday and unexpected, in K. Michel’s poems the reader never quite knows what to expect. His exuberant use of language and choice of subjects make him one of the most interesting poets around at present.
© Rob Schouten (Translated by John Irons)
Bibliography

In Dutch:
Interview with K. Michel by Remco Ekkers

K. Michel at the Koninklijke Bibliotheek (Royal Library, The Hague)

ADDRESS TO THE CEILING

DOWN FROM THE TREES