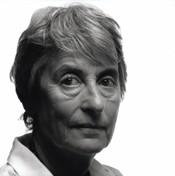 (The Netherlands, 1934)
© Pieter Vandermeer
Biography
Judith Herzberg is one of the most famous living poets in the Netherlands; a selection of her work, in the form of a Rainbow Pocket, published in 1994, reached what was for poetry an exceptionally large audience. Many translators have taken up the challenge of translating her poems into other languages, which has also gained her considerable fame in other countries, but their translations – as is always the case with supreme poetry – have not been able to do any more than approach the musicality, plays on language, layers of meaning and apparent simplicity of the original.
"To adopt a personal attitude to reality," is what – since her debut in 1964, which immediately ran into reprint after reprint – she expresses in her poetry.

Herzberg masters the art of making things in which others do not find anything poignant – a car, cutlery, a mouse, a postcode – perform a heart-rending dance in her words. She prefers to start with something everyday, a cliché, to which she gives a harrowing twist. The casual, sprightly, melodious tone in which the gaping abyss is packaged is Herzberg’s speciality. "The verse-like, the gentle, that I strive for/ and that I hate." The loved and despised song; singing although there is nothing to sing – that is important for Herzberg. Anguish is not named but what it has shaped around itself, and in that way it becomes tangible.

Herzberg also writes for the theatre and for films, and in her poetry this influence is clearly recognisable in her sharp portrayal of characters and human relations. But Herzberg plays on an enormous variety of registers: her poetic work includes oneliners, dramatic monologues, love poetry, studies in words, narrative poems, dialogues... and with all hybrids of such forms.
, Poetry International
Between 1973 and 2019, Judith Herzberg was a guest at the Poetry International Festival 11 times, she was also a member of The Poetry International Advisery Board for many years.

WHAT SHE MEANT TO PAINT