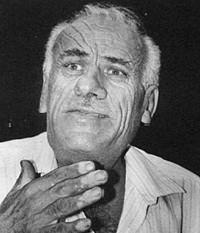 (Mandatory Palestine, 1931 - 2011)
Biography
Taha Muhammad Ali was born in 1931 in a village in Galilee [then Saffuriya in Mandatory Palestine, located on the site of what had once been the ancient town of Sepphoris, now Tsippori in northern Israel.] At seventeen he fled to Lebanon with his family after the village came under heavy bombardment during the Arab-Israeli war of 1948. A year later he slipped back across the border with his family and settled in Nazareth, where he has lived ever since.
In the fifties and sixties, he sold souvenirs during the day and studied poetry (everything from classical Arabic to contemporary American free-verse) at night. Owner of a small souvenir/antiques shop he operated with his sons, he wrote vividly of his childhood in Saffuriya and of the political upheavals he has survived. The Saffuriya of his youth served as the nexus of his poetry and fiction, which are grounded in everyday experience and driven by a storyteller’s vivid imagination. He was self-taught and began his poetry career late. Taha Muhammad Ali wrote in a forceful and direct style, with disarming humor and an unflinching, at times painfully honest approach; his poetry’s apparent simplicity and homespun truths conceal the subtle grafting of classical Arabic onto colloquial forms of expression. In Israel, in the West Bank and Gaza, and in Europe and in America, audiences have been powerfully moved by Taha Muhammad Ali’s poems of political complexity and humanity. He published several collections of poetry and also wrote short stories. His books of poetry in Arabic include Fourth Qasida, Fooling the Killers and Fire in the Convent Garden. Never Mind, his first collection in English, was published in 2000 by Ibis Editions, Jerusalem.
© Rami Saari (Translated by Lisa Katz)
Links
On Taha Muhammad Ali and some of his poems in translation
Language: Enlish
Article on Taha Muhammad Ali by Hakam Abdel-Hadi
Language: German
One of Taha Muhammad Ali’s poems in translation
Language: Norwegian

MEETING AT AN AIRPORT