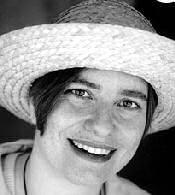 (Israel, 1966)
Biography
The forces of intellect, myth and emotion vie for attention in the poetry of Sharron Hass, where the Mesopotamian goddess Inanna is invoked, and one may also find the ordinary travails of human love.
Many of Hass’s poems involve mythical images and she has dealt intensively with experiences which may be located on the border between reality, legend and dream. Although her poetry has a unique personal stamp, much of it alludes to figures known from ancient mythology and world literature. Hass’ poems give the impression of constant motion in time, space and emotion and they sometimes express secret corners of the poet’s inner world with joyful language that contrasts with a solemn style.

Poet, essayist, and lecturer Sharron Hass is a graduate of the Classics Department of Tel Aviv University, and holds an M.A. degree in Religious Studies. She lectures on literature and poetry at the Alma Institute in Tel-Aviv, the Tel-Aviv Museum of Art, and teaches in the Creative Writing Program at TAU.

Four of her five books of poems are prizewinners: The Mountain Mother is Gone (1997, the Hezy Leskly Award and the Art Council Prize), The Stranger and the Everyday Woman (2001, the Israeli Prime Minister's Prize for Poetry), Daylight (2011, The Bialik Prize), Music of the Wide Lane (2015, The Dolitsky Prize in 2017).

In 2005 Hass received a Fulbright Scholarship to participate in the International Writers Program (IWP) at the University of Iowa.

Translations of her poems into English and other languages appeared in anthologies of contemporary Israeli poetry, such as:  Chacune a un nom: Femmes poetes et artistes d’Israel (Caracteres, 2008); Poets on the Edge: an Anthology of Contemporary Hebrew Poetry (SUNY Press, 2008); With an Iron Pen – Twenty Years of Hebrew Protest poetry (SUNY Press, 2009); Plague of Thirst (Kalligram, 2016).


Also on this site
Writing a mythology of women’s relations
An interview with Sharron Hass.

“The one at home desires to leave, the one outside, to enter”
PIW editor Rami Saari on Sharron Hass’s ‘How Many Times Do We Want to Go Home’.

HOW MANY TIMES DO WE WANT TO GO HOME

THE MOUNTAIN MOTHER IS GONE

FOUR O’CLOCK IN THE MORNING