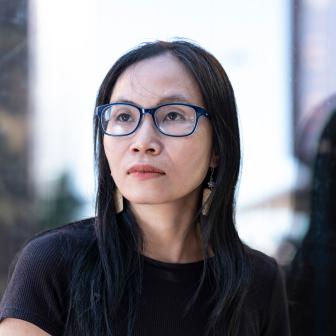 Nhã Thuyên, pseudonym of Do Thi Thoan, will be in Rotterdam as Poet in Residence, to write and perform at the festival. She was appointed lecturer in Vietnamese literature at the University of Hanoi in 2012, on the basis of her dissertation on four activist Vietnamese poets, but after a wave of propaganda prompted by the tightening of the country’s political regime she was fired in 2014, and she was stripped of her Master’s title. This simply served to strengthen the critical attitude she had already revealed in her ideas and in her writing. Nhã Thuyên chooses a very wide range of subjects and perspectives. Often an I attempts to get a grip on a situation in an everyday environment, amidst a flow of associations, by acting, speaking and by responding to and reflecting on the risks of that action. Her poems also express a longing to be boundless and intangible. The language is playful, dynamic and gives the poems momentum, producing a gripping result of insistent poetic quality.

A SOUND OF FLAPPING WINGS

WHEN WILL THE SHEDDING END