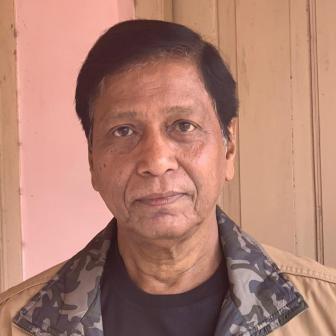 (India, 1949)
Biography
Imbued with a distinctly urban sensibility, the poetry of Ranajit Das combines intellectual sophistication with an ironic turn of phrase and deep existential unease. The author of eleven collections of poetry, two volumes of literary essays and one novel, Das writes in Bengali. Born in Silchar, Assam, he moved later to Kolkata where he worked in the West Bengal Civil Service from which he voluntarily retired in 2006. A self-confessed lover of painting, film and football, he lives in Kolkata with his wife and son.

Das’ other work includes a significant anthology of poetry from Bangladesh, entitled Bangladesher Shreshtha Kabita (2009), and a book of his poetry in English, translated by Nirmal Kanti Bhattacharjee, A Summer Nightmare and other Poems (from which the poems in this edition are selected). He is the recipient of numerous awards, including the Birendra Chattopadhyay Memorial Award (1994), the prestigious Rabindra Puraskar (2013), and the Ramnath Bhattacharya Award (2019).  He has travelled widely, and read his work at various national and international platforms.
The range of cultural, historical and geographical reference in Das' poetry is wide and often playful: from Michel Foucault to Edwina Mountbatten, from an Amazon rainforest to Sealdah station in Calcutta, from the figure of the self-conscious modern metropolitan poet to the Partition refugees of 1947. The range of preoccupation is wide enough to journey from the aeriality of clouds to the materiality of cowdung, from metaphysical speculations on Buddhism and existentialism to “the immense sorrow of famished women” in rural India.

The irony is sharp, but can often be self-directed. The capacity for droll self-deprecation is particularly evident in ‘The Poet and the Pub’, a poem in which Das speaks of his contempt for his tribe—those poets whose “pretension and ambition are both limitless”, “illicit smugglers of sorrow and sin”, consumed by “self-love”. And yet, this is not a series of jibes at an insufferable people “out there”, but an acknowledgement of a rueful brotherhood of which he is a part. The poet wryly acknowledges that the bar seems particularly desolate without “at least one self-obsessed modern poet at the table”!

God is a recurrent presence here. This is not some abstract cosmic soul of Eastern metaphysics, not a benevolent creator, or omniscient protector, but a gleeful, voyeuristic schoolboy “who watches his mother having illicit sex/ with his father’s assassin.” This is a perverted, violent, mentally deranged divinity whose creation does not permit the perception of “a single healthy truth”, because human life is itself “an ailment of God”.

Das combines gravitas with wit, often making the large point with a lightness of touch. This is evident in the parable of the fish that consumes the pompous beetle in a parody of Animal Planet, and in the mock-serious use of detective lingo to ferret out tragically self-evident truths about poverty and deprivation.

Underlying the stance of the urbane, self-ironizing philosophical observer, however, there are the inescapable unresolved questions—about “crime, slow-poisoning, sunstroke and God”, as the poet puts it. The poet is also aware of the difficulties of using the intellect as a tool of self-knowing. How can one decode the self in a creation that is itself a disease of the divine? How can one understand the fissured and festering human self when the creator himself seems soiled, divided and deeply culpable?

Even introspection is a dangerous business here because the most insidious gatekeepers are of one’s own making. There are perils and self-delusions, the poet points out, in trying to decondition oneself of one’s past. “Getting really close to one’s own self is an incredible act of subversion. I keep digging the tunnels, but the police are on guard.”

The darkness of this vision is leavened time and again, however, by humour. And even as Das has the invariable poet’s questions about posterity and his legacy for the future, there are no delusions of grandeur. Instead, he reveals again the self-ironising ability to see a world where ‘all memories will be swept away’ like ‘plastic dishes after a feast’. This is a world where hierarchies are laid to rest. Where an image of a tired mother and an aristocratic Nehru, a Sherlock Holmes and a Watson, a pickpocket in a Calcutta station and a poet in a smoky bar, are rendered equal. Where both books and termites must be saluted with the same respect.

THE POET AND THE PUB