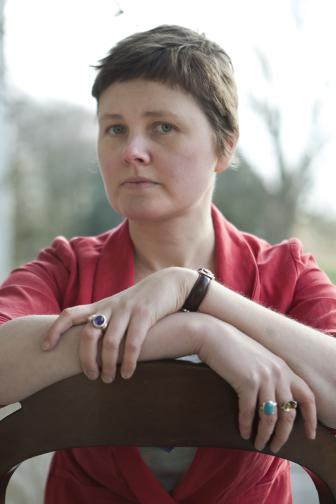 (The Netherlands, 1985)
© FotoBuffel
Biography
If the world and everything in it can be infinitely dissected into parts, where does this leave humans? This is the question that Gerda Blees seeks to answer in Dwaallichten (Ghost Lights), a debut that immediately captured the attention of juries, critics and readers with its distinctive interrogation of our complicated existence. These are poems in which French kissing and particle physics go hand in hand.


'And I ask you / whether we’re just an accidental collection / of nuts and bolts in the hand of someone who / may never have had the intention of making / a working machine out of us.' In light-footed poems with tragic undertones, Blees describes people who have ended up slipping through the cracks due to circumstance: individuals trying, in various ways, to keep a grip on reality.

Blees, who also writes short stories, is a keen observer, which results in stunning images such as these lines from 'Ghost Lights', about 'those people… at night / they’re afraid the canals won’t be able to sleep / if the door isn’t left ajar.' She chooses not to emphasize misery or madness; instead Blees often approaches difficult subject matters from an unexpected angle, as when her language turns toward an anorexic girl: 'Hunger has eaten the last flesh / from her skeleton.'

Dwaallichten is an exploration on how to live, in writing that is at times painful and confrontational. But due to the openness and the sense of wonder Blees brings to human suffering, her flights of absurdity, and an innate feeling for rhythm and sound, these are poems are difficult to put down. An incredibly strong debut that leaves the reader yearning for more.