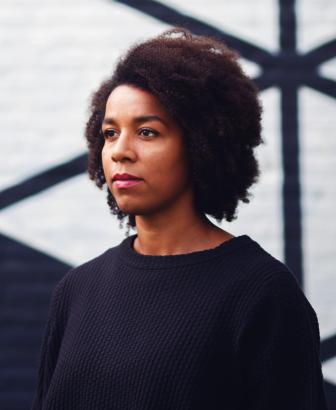 (The Netherlands, 1991)
© Masha Bakker
Biography
Simone Atangana Bekono studied Creative Writing at the ArtEZ Institute of the Arts in Arnhem. In 2016, she graduated with a collection that would become her poetry debut, Hoe de eerste vonken zichtbaar waren (How the First Sparks Became Visible, 2017), which was awarded the Poëziedebuutprijs Aan Zee for best first collection in 2018. Besides poetry, Atangana Bekono also writes prose. Her first novel, Confrontatie[Confrontations], will appear in September 2020.
In her sweeping epistolary poems, Atangana Bekono explores the relationship between body and identity, and ways of expressing this in poetry. The problematic nature of the body features in the very first poem of the collection, ‘I’. Following a forest birth – beyond civilisation, as it were – it is the silhouette rather than the body that speaks up, denying its physicality and connection with the earth: “a body become unrecognisable/greedy and chaotic /with no roots in the earth”.

Her awareness of having a black, female body triggers a range of reactions, from feelings of displacement to anger at those who would oppress black women: “I hoped to be able to eat the man up/ to protect my sisters” she writes in the poem II And in the ultimate, inevitable metamorphosis, in the poem numbered III, she attempts to escape an overly simple and occasionally racist categorisation: “I am a cool afterthought, a drum kit, I am a religious fanatic”. In poem ‘IV’, Atangana Bekono writes, “All black people don’t exist.”

The poet regularly returns to her longing for relaxation, vacation, and to childhood memories, as if out of a need to create mental spaces where she can break free from her identity. “I think of black a thousand times a day and try to extract/ that word from me”, she says in poem ‘VI’. Characteristically, she also turns her engagement and the complexities surrounding her potential identities into the objects of her investigation: “I think that actually, I care a lot about everything. The only problem is that you can’t care about everything simultaneously”, Atangana Bekono writes in one of the letter-like texts in her debut book.

Simone Atangana Bekono’s poetry constantly alternates between combativeness and tenderness, showing how the personal can be simultaneously poetic and political.