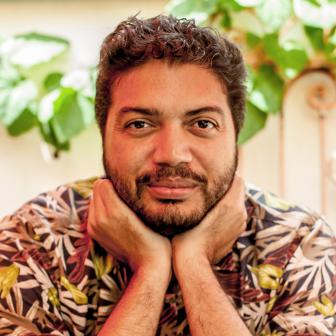 (Dominican Republic, 1978)
© Lidybel Martinez
Biography
To venture into the poetry of Frank Báez (Santo Domingo, 1978) is to dive into a tragicomic, apparently autobiographical world of poems about a young islander who would most like to go out into the world and become an artist. The laid-back, almost prose-driven rhythm is immediately striking, and though at first it seems to be used almost randomly, it provides the one constant amidst this Caribbean melancholy, amplified yet more when Báez performs his own work. Because reading these poems quietly on paper does not do them justice: Báez is a performing poet, an artist of the spoken word. His readings often feature theater, computer-generated sounds, or even a full band, since Báez is also one of the “singers” of the Dominican collective El Hombrecito. They have released three albums so far, each with several songs that use Báez’ poems as lyrics.

Báez’ work of course also appears in print: he has published four poetry collections so far, among them the award-winning Postales, plus short-story collections, and works of journalism and travel writing – because the young islander who wanted to see the world has since done so. His work has now been translated in more than eight languages and he is a welcome guest at poetry festivals the world over. And these travels show up in his poems too: Chicago, Egypt, the Mediterranean – one by one these locations are folded into the universe of the young man who wants to live a grand and buoyant life but cannot get his beloved Caribbean island out of his system. Again and again Báez returns to the quay, the pier, the waves:

We both have aged, but
despite the passage of time
I keep coming to this reef

your beaches I picked up a conch
and I put it against my ear and you
you spoke to me for the first time.

This sense of returning over and over is a common theme in Caribbean poetry, and perhaps especially for a poet whose favorite poem is “The Light of the World”, in which Derek Walcott so brilliantly evokes this place. It is only a matter of time before Báez will also write a classic like that. He has already got the parlando Caribbean rhythm down pat, and leaving the island is no longer a prerequisite for fame – that was confirmed in 2017, when Báez was the only poet included on the Bogotá39 list of the best Latin-American writers under forty.
© Luc de Rooy (Translated by Florian Duijsens)

LAST NIGHT I DREAMT I WAS A DJ

VARIATIONS AROUND A LOVE POEM

BRIEF CONVERSATION WITH THE CARIBBEAN SEA