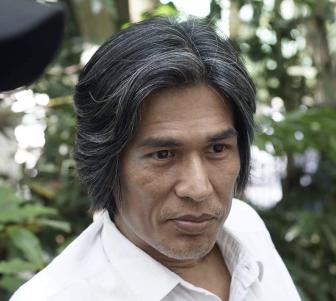 (Burma, 1969)
© Ko Oo
Biography
Moe Way was born in a hamlet in the Irrawaddy delta and moved to Rangoon at an early age. Life in the city must have enthralled the poet. Most of his best-loved poems are coloured by the place. In ‘Rangoon’, written in 2013, Moe Way sees the city transitioning into Yangon. Still awake at wee hours, the poet hears night watchmen ringing the bells at every hour to reassure him “All is well.”

The poet is less than reassured. Everything around him is in flux. Old redbrick buildings are gone. In their place, glassy shopping malls and banks have sprung up. The paradox of Yangon is that while it is attracting millions of immigrants from rural Myanmar on the lower end and thousands of foreign businessmen on the upper end in transitional Myanmar, it has lost its status as the capital city.

Still 'Rangoon' is not just about Yangon. Given that Yangon probably has become one of those developing-world cities that will remain in a perpetual transition, the poet asks one of the most daunting questions artists are often faced with, “How will you reinvent yourself?”
In Three/Four Stops with Mr. President, the speaker imagines himself bumping into the President of Myanmar on a Rangoon bus. In 2012, when the poem was written, "Mr. President" was popular slang for a dodgy person. The tone is willfully obsequious. The poet also chronicles the language and manner of soon-to-be-redundant Rangoon bus conductors, the so-called “spares”. While the poet and the President are engaged in a conversation, most of the commuters remain aloof in the background – their conversation only interrupted by the cussing of the spare. Changes in Rangoon are so perplexing that the poet and the President seem to have missed the bus stop they are supposed to get off, but that’s not the end of the poem.

Rangoon Self-censored to be better Three/Four Stops with Mr. President Watch out, Maung Maung [There is such a thing as retribution] So the Library, So Also the Museum
Poems
Poems of Moe Way

Self-censored to be better

Watch out, Maung Maung [There is such a thing as retribution]

So the Library, So Also the Museum

If You Need to Piss, Go from the Other Room