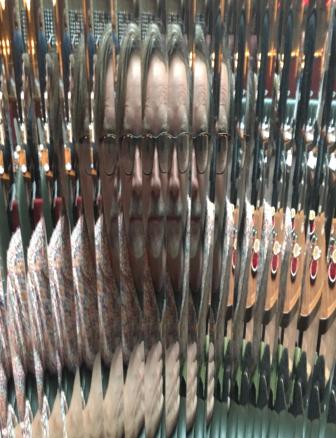 (United States of America, 1960)
© Photo courtesy of author
Biography
Called ‘the most striking and unusual new voice’ in contemporary British poetry’ by John Stammers, Mark Waldron brings us a world at once real and unreal, familiar and strange. His self-reflexive poems break the fourth wall and then give the fourth wall a personality. He is pursued by a cast of recurring characters who seem to rebel against their creator. Original, accessible and fantastical, Waldron’s wit, weirdness and dazzle saw him named a Next Generation Poet by the Poetry Book Society in 2014.

Waldron was born in 1960 in New York and grew up in London where he still lives. He works as an advertising copywriter, a creative and playful profession but one he is ambivalent about. Waldron began to write poetry seriously in his early forties, attending workshops with Michael Donaghy at first and later with Roddy Lumsden. In 2008 he published his first collection with Salt Publishing. Witty and tender, The Brand New Dark introduced the world to Waldron’s distinctive style and askance way of viewing the world. In the opening poem ‘Underneath the Gone Sky’ is a vignette, but the real action is the narration itself. The poem ends:

[…] I promise
they were absolutely ruined by its magic.

This interjection is typical of Waldron. It is earnest but arch. It reassures us but by doing so it calls attention to the constructed nature of the poem.

Waldron’s descriptiveness isn’t imagery exactly, it seems to get up-close or inside the matter it describes. It is funny, gross, surprising: “With their unique arrangements of white fat freckles / they’re glossy individuals, wee circus elephants, / gripping the tail of the one that goes before, / marching uncertainly away from death” (‘The Sausage Factory’). This segue between silliness and weight is a staple of Waldron’s work. His poetry has a deadpan style but is concerned with all the major questions of Western philosophy: life, death, meaning, self – the self especially. Take ‘The Well-Dressed Street’:

Her self is a long, translucent eel,
over which the days pass, its tail at her birth, its brain here,
pushing the look of her along.

The “her” here is Marcie, one of Waldron’s many recurring characters – who themselves shape-shift and don costumes. Cyphers and stooges, they are symbols that refuse to behave. Playing with and on the idea of authenticity and authoriality is another of Waldron’s favourite pastimes:

Just to make it clear from the start.
So we know where we are. So we know who we are
and that I’m not some invented clown,
some phoney alter ego. My name is Jean Pascin […]

The Brand New Dark has laugh out loud moments, but it also has moments of stillness and quiet, for instance the final poem ‘Be Quiet’, quoted here in full:

be still.
Let your hands rest on your paddles,
let your skin-canoes slow
and listen to the sound of the swamp.
The water thinking about itself,
the trees stood in it.
And know how the manatees
are down there underneath,
arranging and rearranging themselves
into what we might call stories.

The Itchy Sea was published in 2011. The sea is a recurring image in this and all Waldron’s collections, both at once real and metaphorical: “The itchy sea, / being eternally discomfited, / seeks an original arrangement […] as a man is shevelled red and raw / about the brittle sticks of him” (‘The Blown’). The book is particularly concerned with the mind-body problem, with the idea of our parts; insides, outsides, skin, flesh, bones and souls, self and other. In ‘Were I to jump’ a fatal plummet is imagined:

[…] at the end of that fall, the ground will act
like a sieve, keeping my flesh and bones to itself,

(perhaps a metre or so, depending on the height
of the preceding drop).

And then, relieved of its hot nest,
it will wear on its face the most abject expression,

not that of the exposed oyster as it’s sucked, sobbing
from its shell, but rather,

that which the fledgling wears underneath its feathers,
when it takes its flapping plunge into maturity.

Waldron’s virtuosic deployment of language – combining different registers, coining new words and reutilising old ones – remains a constant, and a constant source of enjoyment. But there is, as ever, something deeply serious about such silliness. Objects are imbued with the same pangs of existential angst as people; imaginary worlds are as irrational as the real one; ‘know thyself’ is an impossible directive.

Waldron’s third collection Meanwhile, Trees (Bloodaxe Books) was published in 2016. While there is a great deal of continuity in style and themes between all his books, not to mention the returning characters, this collection is perhaps more joyous:

I think I might have known the whole drag of everything
going upwards, a tide that pulled me with it.

Actually, I know I did.

(‘All My Poems Are Advertisements for Me’)

The world is seductive:

So, you bust us in flagrante,
me and my other beloved, myself and my infinite
intimate, the world, my mistress world.

“Forgive me,” Waldron writes, in ‘Confessional Poem’, “I’ve pretended / everything’s just terribly droll and awful.” In ‘The Meeting’ the poet’s persona meets Wayne Rooney: “I believed / that in this unfamiliar location our toddling / souls might spy each other”. There’s a sweetness as well as a seriousness behind the silliness.

The same sense of the immense and unbridgeable gap between being and not being is there in ‘The Stick’, one of the poems published since Meanwhile, Trees: “This bit of stick I found in / the park was showing off because the dead can’t have it.” In ‘I wish I loved lawnmowers’ Waldron explores new territory, suggesting a growing interest in the workings of desire and addiction on the self, but with his usual trademark dark humour. In The Boston Review, poet and critic Dai George wrote:

Waldron has been busy forging a new language of deadpan, twenty-first century surreal, as receptive to John Berryman’s influence as anything written in the wake of The Dream Songs, as sceptical of the lyric self as anything in John Ashbery, and usually a lot funnier.

Absurd, surreal, Berryman, Ashbery and Beckett are often invoked as part of Waldron’s inheritance. But the writer who most often comes to mind for me is Muriel Spark. There is something in the reassuring lilt of the narration that makes the weirdness which it narrates all the more jolting:

Where we press up upon our living
there are jolts […]

(‘Well yes, where we interface’)

It is these jolts that Waldron seeks to recreate, in these moments that we find meaning – whatever that might mean.

I wish I loved lawnmowers

All my Poems Are Advertisements for Me