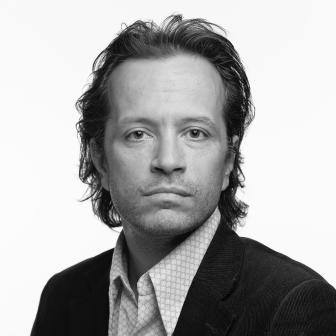 (The Netherlands, 1975)
© Tineke de Lange
Biography
Joost Baars is a poet, a maker of poetry programs and, for more than twenty years, a bookseller. In 2017, Baars, who has been writing poetry for a very long time, published his long-awaited debut volume, Binnenplaats, which earned him the last VSB poetry prize and a nomination for the C. Buddingh’ prize for best debut.

A few years before the publication of the collection, Baars decided to jettison all the work he had written up to that point. He made a new start, writing poetry that he would continue to produce even if no one ever read it, no longer with future readers and their opinions and approval in mind.

This effort resulted in the sturdy debut Binnenplaats, a bundle consisting of four parts, and a first and last poem that each stands alone. The parts differ from each other – one of the volumes consists of translations of the nineteenth-century English poet Gerard Manley Hopkins – but they all have the same themes. The act of naming, finding words, attributing names and thus meaning, runs as a clear thread through the collection (“because the naming of names is an act”,  writes Baars in 'Theology of the Chair'). Language often fails, but is also an instrument of great importance, as in the emergency situation described in the opening poem, in which the speaker needs his words at a moment of sudden danger of losing his love to a heart attack. This theme is also visible in the ambitious translations of the elusive work of Gerard Manley Hopkins, requiring the utmost of the translator's language.The world, on which Baars' language tries to get a grip, is just as elusive, and rarely offers a hold or any certainty. Baars' collection expresses the great urgency to make the poem, and thus also the reader, a witness to this situation.
, Poetry International
Bibliography:
Binnenplaats. Van Oorschot, Amsterdam, 2017

what we started we start

the rustling in the trees is

in spite of what I tell

theology of the chair