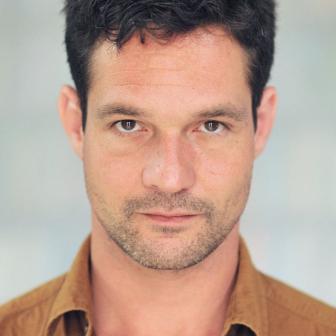 (The Netherlands, 1975)
© Victor Schiferli
Biography
Ever since his debut, Thomas Möhlmann has been exploring the existential task of the individual to relate to the world in a manageable way. This task is not easy because the world has been made incomprehensible, unpredictable and not very trustworthy by people themselves. In poignant poems Möhlmann shows how life is often an attempt to grasp a sense of meaning, a search for the courage to take the next step, to find a point of reference that justifies the hope of a better future: as everything changes, everything can also take a turn for the better. “We are still alive, everything you think, everything you want, we can still become now as far as I am concerned”, as Möhlmann writes at the end of the title poem from his fourth collection Ik was een hond (I was a dog).


Despite failure and doubt, all kinds of things are possible. Möhlmann often lets the “I" in his poems be made known to a certain “you”. A tone of confidentiality and shared feelings are caught up in this. In these poems, but also in many other poems constructed as monologue or meditation, a remarkable aspect of Thomas Möhlmann's poetry resonates: the belief in the feasibility of love.This underlying theme is serious and optimistic, which does not alter the fact that Möhlmann dwells sufficiently on the despair to which love is also prey.

Möhlmann manages to be both elegant, compelling and disturbing at the same time in his poems. And by elegant I mean smooth, graceful, refined. When he creates a scene in which a person with all his imperfections works through an actual situation in everyday life, an atmosphere of melancholy often arises. Yet, when the “I” turns to another, a “you”, there is also room for tenderness, unspoken sometimes, but tangibly present. Thomas Möhlmann writes about people, in all their ordinary, everyday worries, thinking, feeling and acting in a world that never completely in accord with each person - a challenge and a consolation at the same time.


Thomas Möhlmann was born in the Netherlands in 1975 and read Modern Dutch Literature at the University of Amsterdam. He has published four books of poetry in Dutch, and compiled eleven poetry anthologies in the Netherlands, Macedonia, Argentina, Colombia and the UK. He teaches Creative Writing at the ArtEZ Academy of Arts in Arnhem and Poetry at the Amsterdam Writers Academy and is one of the editors of Dutch poetry magazine Awater. From 2004 till 2016 Thomas was editor of the Dutch domain of this website (PIW).

His first collection of poems, De vloeibare jongen (The Liquid Boy; 2005) was shortlisted for the C. Buddingh’ Prize for new Dutch language poetry in 2006 and was awarded the prestigious Lucy B. & C.W. van der Hoogt Prize in 2007. His most recent collection is Ik was een hond (I Was a Dog; 2017).
© Jan Baeke (Translated by Jan Baeke & Lisa Katz), Poetry International
Bibliography

Mother come out of the tree