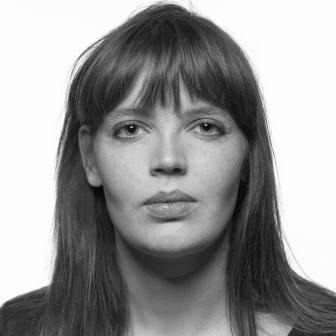 (The Netherlands, 1993)
© Tineke de Lange
Biography
Hannah van Binsbergen studied philosophy at the University of Amsterdam. She published her first poems in the internet journal Samplekanon and writes for Tirade and DW B. Van Binsbergen debuted in 2016 with the collection Kwaad gesternte (Evil Stars), awarded the VSB Poetry Prize in 2017.
There is a lot to wrestle with in van Binsbergen's poems. She does not shrink from the big subjects, while failure always seems to lie in wait.

Van Binsbergen’s poems often provide a personal investigation of what happens to and around the poet. At the same time, she is aware of the fact that the surroundings she contemplates are also observing her: "Nu iedereen met me meekijkt kan ik eindelijk beginnen / te groeien naar de markt." [Now that everyone is looking over my shoulder, I can finally start/
to grow towards the market.].

"Words are originally magic and have actually lost little of their old magic in modern times", writes van Binsbergen on Samplekanon about her poetics. This ‘magic’ of words, and their power to be able to make a difference in the world, can be found in her debut collection. It gives special significance to the ‘correspondences’ in the last part of the book: communications with her doctor, with Sylvia W., with the reader and with herself: ‘Ik heb veel gedaan / om eindelijk mijn eigen naam te kunnen zeggen.’ [I have done a lot / to be able to say my name at last.].

An amazing debut collection without a single weak poem. In Kwaad gesternte, Hannah van Binsbergen is on a mission to find something to hold fast to, not as a unique individual, but as an insignificant cog in the system. She sets an angry inner world against the grim outside world - but aren’t those two actually the same thing? This is poetry which cleaves and takes root, written in and for a time when straightforward principles have become a rarity. The good, the true and the beautiful are all on the ropes, exhausted. It may be considered a minor miracle that flowers of evil can still blossom in a tiny corner.

WHERE IT BLOOMS AND ABOUNDS BLOOMING

Quite Naked Apart From An Old Vest

Last night my cover was blown on the children’s news

FROM THE POINT THAT WAS MADE ALREADY

FORECASTS OF JULIA AND SYLVIA

Now that everyone is looking over my shoulder