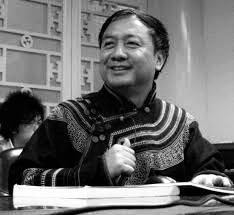 (China, 1964)
Biography
Aku Wuwu 阿库乌雾 (b. 1964) is a poet of the Nuosu subgroup of the large Yi nationality (Yizu) in southwest China.  He began writing poems and prose poems in the 1980s, and is known as the creator of modern Yi poetry written in Yi.  Like most other ethnic minority poets in China, he also writes in Chinese. Known for his powerful performances of poetry drawing on traditional themes and motifs juxtaposed with contemporary challenges facing his ethnic group, Aku’s best known work is “Calling Back the Spirit of Zhyge Alu,” which refers to an ancient mythic hero.

Over two million Nuosu people live in the Liangshan Yi Autonomous Prefecture in southern Sichuan province, and surrounding areas.  The name “Aku Wuwu” is a Sinicized version of Apkup Vytvy as written in Nuosu Romanization.  His Chinese name is Luo Qingchun.  Growing up in a hamlet, Aku learned to speak Chinese around age seven and by age 18 had enrolled in the Southwest University for Nationalities in Chengdu, the capital of Sichuan province.  Aku is currently the dean of the Yi Studies Institute and is involved in many projects to further the education of Yi students. '

At Twilight, Longing for my Amo