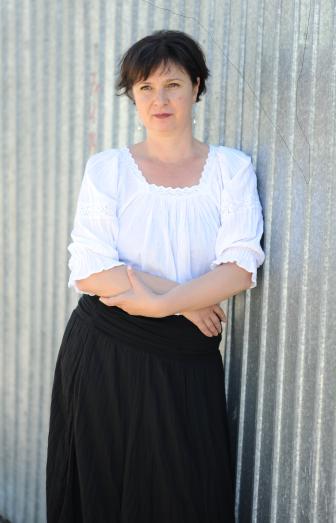 (Romania, 1963)
Biography
Ruxandra Cesereanu is one of the most important contemporary Romanian writers. She was born in Cluj on August 17, 1963. Over the last two decades, she has been writing poems and novels lauded with a number of literary honors. She is also a professor in the Department of Comparative Literature at Babeş-Bolyai University and staff member of the Center for Imagination Studies at the Phantasma institute, serving as director of the creative writing workshops on poetry, prose and screenwriting.
Cesereanu's work differentiates itself from Romania poets by displaying strong influences from the Surrealist and Postmodernist traditions. Her experimental poetry uses psychoanalytic techniques to create collages, in which femininity and eroticism play large roles.

Her work is not only very personal but political. Cesereanu has experienced the uprising and fall of the Romanian communist regime. She has written about Romanian politics and is known for her politically activist work. Through her innovative style of poetry, she battles hegemony and oppression, without losing touch with the personal.

Cesereanu’s poetry has also been selected for inclusion in anthologies in English, German, Hungarian, French, Chinese, Armenian, Flemish, and Spanish. Her achievements have been noted in Who’s Who in Contemporary Woman’s Writing, edited by Jane Elridge Miller (Routledge, London and New York, 2001) and Harold B. Segel, The Columbia Literary History of Eastern Europe since 1945 (Columbia University Press, New York, 2008).